Heather coaxed me to bed early last night - 9:30 pm.  At my age, and for whatever reason, I begin waking up between 5 am - 6 am, no matter what time I make it to bed the evening before.  So, if I'm going to get extra sleep, the controlling variable is the time I lay my head on the pillow.  I'm glad she did. Eight and a half hours of sleep feels very good.

I had somewhat forgotten the daily grind of election season and what it felt like.  It is exhausting, and it pretty much never stops unless you purposefully take a break.  The physical effort of putting up election signs combined with the mental agility of answering questions on The Talking Stick, on the street, on email, or on social media really adds up.  There is also an undeniable emotional dimension to this experience that is quite pronounced.

I was booting it across the bridge yesterday to the corner of Thickwood Boulevard and Cornwall to fix one of my signs - the RE-ELECT sticker was almost coming off.  As I was driving up the hill I starting thinking about my wife, how much support, love and encouragement she provides, and I got all misty-eyed.

Like every single candidate running in this municipal election, we all have full-time lives beyond the campaign.  We work as teachers, administrators, lawyers, realtors, heavy hauler operators and myriad other professions.  We all have family that needs our attention, along with leaves (it is autumn) and laundry (in my case).

In many ways, an election campaign is a test of character and resolve.  It is a four-week job interview where the bosses (the voters) expect your best, and they will put you to the test. 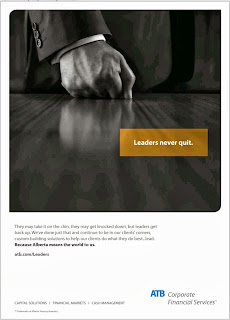 This ATB ad jumped out at me in this morning's paper.  Leaders never quit.  That says a lot doesn't it.  Perhaps it says everything.

I never quit, though I'd be a liar if I said I didn't think about it sometimes. This is tough stuff we are tackling, especially tough during the throws of an election campaign. If it was easy, everyone would be doing it.

Meanwhile, I feel fresh this morning and will endeavour to take Heather's lead and try to make it to bed a little earlier on a regular basis.  An extra 90 minutes of sleep has made a real difference.
Email Post