The Bridge Across the River Snye 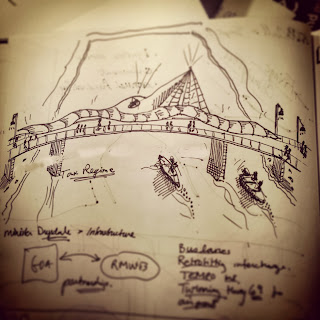 So much of what we're doing in City Centre comes down to one word: options.  I conducted an interview with Amanda, one of the young and talented planners working on the project for an upcoming story in Your McMurray Magazine, and she said that the thing she is most looking forward to is being able to come downtown and discover things to see, do, eat and explore.  It's almost hard to imagine right now, but one day soon, gathering your friends to go for a walkabout downtown will be as normal as suggesting an afternoon at MacDonald Island or a stroll down Birchwood Trails.  There is a structure being planned to span the Snye that is an additional option, or is it?

The bridge.  Why is it in the budget and why are we even talking about it?  Someone suggested that the money might be better spent putting in a parkade on MacDonald Island.  You can ask Robert Vargo from Alberta Motor Products about the price of building vertical parking structures, as he spoke about it during his council appearance as part of the expropriation debate, but it is enormously expensive and would not solve the challenge that success is creating.

The bridge is all about egress (def: the action of leaving a place) and emergency vehicle access.  We've seen what the traffic flow is like when MacDonald Island is busy now.  On a trade show day or when Sustainival is going full tilt boogie, cars are parked everywhere and going home is a slow and lugubrious crawl.  It's even worse when a major outdoor concert is happening while other events are going on in the Suncor Community Leisure Centre and a bunch of people are golfing.  We are about to add even more amenities and create circumstances when you could have upwards of 20,000 bodies on the Island at one time, potentially more.  Yes, traffic flow will be better when the Grant MacEwan Bridge opens, hopefully before winter sets in, but giving them multiple options for getting on and off the Island is going to be critical.  Those options will include parking (more than we have now), public transit (park 'n' ride for major events), and walking over, having found a parking spot somewhere nearby in City Centre, or having parked further down Franklin and taken the Franklin shuttle to the Civic Plaza.

The bridge will not only cut down the walking time to MacDonald Island, it will provide a guaranteed route if an ambulance needs to get someone to the hospital.  The bridge deck will be wide enough to allow walkers to move off to the side and quickly allow the emergency vehicle to pass and get to the other side.

The cost of building the pedestrian bridge is largely located in building the span.  The engineers and planners can speak to this much more intelligently than I can, but there is a standard cost to doing these kind of projects, and with the Fort McMurray Factor added on top, that is why the price is so high.  Will it be as high as the number that was put in the capital budget as a placeholder?  No.  Based on what we're hearing, it's going to come in much lower.  But its necessity, from a safety and access perspective, is unquestionable.  We have a responsibility to provide for the security and safety of the people we invite to enjoy this world-class amenity.  The pedestrian and emergency access bridge is an integral component of that deliverable.

Since we need to build it to allow MacDonald Island to be all that it promises to be, we're going to make it something special, an amenity that is attractive, functional, safe and a destination in its own right.  It will also provide a beautiful link from the City Centre entertainment district to the Civic Plaza district, across the Snye to Shell Place and the Suncor Community Leisure Centre.  In effect, it will tie everything together and create a walkable environment with unparalleled views and access to the water.

I hope that helps.  I'm sorry if we haven't communicated more clearly on the "why?" of the bridge, but there are compelling reasons for having it in the plan.

The City Centre team have been working hard on design and costing.  My understanding is that the public will be able to provide their feedback, ask detailed questions, and find out the real price of the project in the next couple of months.
Email Post