I can only speak from the perspective of one candidate, a first-term councillor seeking re-election.  In other words, I won't presume to suggest what my fellow candidates have experienced these last four weeks, though I suspect you could write a book about the ups and downs, sleepless nights, and sign installation malfunctions.

It has been a roller coaster ride for me, with emotional peaks and valleys very different than I remember from 2010.  Back then, the emotions were rooted in the absence of my son Dylan who had undergone major leg surgery as that campaign got underway and spent the next three months in the rehabilitation hospital in Edmonton.  I was also a hopeful three years ago, with nothing to lose and everything to gain.

As we near the finish line on this campaign, I go back and forth as to whether I'll get back in or not.  Some people are very magnanimous in their pontifications of the numbers we'll see between 8 pm and 9 pm tomorrow night.  Statements like "You'll get in for sure" or "You have great support" strengthen me for some of the opposite perspectives I read on social media, especially with one particular Facebook group that favours a very different set of values from my own.

This uncertainty and wavering doubt has created a churn in my stomach that will only go away when that last vote is counted and the six successful candidates in Ward One are announced.  Mentally, I think I have a good chance to win; mentally I'm prepared for either outcome; it's anyone's guess as to how I'll emotionally react to whatever the outcome is.

I'm really looking forward to returning to a semblance of a normal life, no matter the result.  If I'm successful, we immediately shift into getting the new council up and running, with lots of preparatory meetings.  If I am not in the top 6, I will likely spend a few days processing the significant change in my life that will have occurred.

The kind comments of many have been very appreciated in the last few days.  Your support and acknowledgement of the effort that I have made along with those of my colleagues has emboldened my resolve and belief in the decisions we have made and the course we have set.

Pastor Glen, in his sermon this morning on being contemporary and relevant reminded us that we are born at a time in history ordained for us.  In other words, the challenges and opportunities that are presented to us are purposeful and important.  But, it was a sentence he said near the end of the sermon that really jumped out at me.  It followed directly after he encouraged us to "stop complaining and start creating". 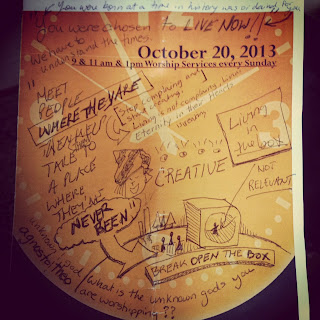 I was sitting in my seat furiously jotting down notes and missed the exact wording of the sentence that followed.  So, as soon as the service was over, I asked to see his notes.  Here is the sentence:

Pointing out ugliness is easy.  Creating beauty is the hard part.

I'm interested in being a positive, creative force as a politician, community builder, husband, father and friend.  That's who I am and what I have to offer as a human being and as a candidate in this election.

Thanks for your support and encouragement, and thanks for reading.
Email Post