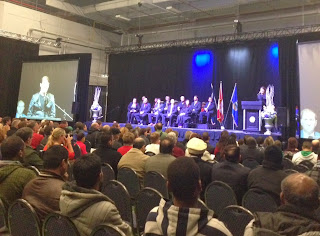 "You must be going through a range of emotions being here tonight?" someone asked me last night at the swearing-in ceremony for Mayor and Council.  To be honest, I thought there might have been some whispers of sadness and regret that I wasn't on the stage, but as it turned out, there wasn't.  Rather, I was really happy to be there and listen to the words of Mayor Blake and Councillors Ault, Boutilier, Bussieres, Cardinal, Chadi, Germain, McGrath, Meagher, Stroud and Vinni.

I was touched by the shout out by Guy Boutilier during his public address, and the emotional words of Tyran Ault. Lance Bussieres, though he claimed he is not a public speaker, did a bang up speech.  Julia Cardinal and John Chadi brought the Fort Chip perspective, the latter actually beginning his words in the beautiful Arabic language.  I thought Sheldon Germain was eloquent, succinct and humorous with his address.  Keith McGrath jokingly pulled out a speech he's had ready since 1997, the first time he ran for council, and gave what I thought was the evening's most heartfelt and moving address.  Phil Meagher, ever the card and always intent on doing what's best for our community, committed to not cut his hair until our seniors get their long-awaited long-term care facility.  Jane Stroud - the hardest working councillor I've ever seen - reaffirmed her advocacy for the citizens of Ward 4, while Al Vinni kept it short, sweet and perfect to close out the program.

I purposely left Mayor Melissa Blake to the last, even though she was first.  She couched her words in a sports team metaphor, as there is no doubt that bringing this new group - brimming with varied interests and agendas - together to work toward a common goal and vision is going to be Job #1.  I was encouraged to hear her suggest that "this team will bring their varied skills together."

I was even more encouraged to hear Councillor Bussieres speak directly to the worry that many of us have with a governing body that emerged out of simmering dissatisfaction (by some) and a desire for change.  "While we bring different ideas to the table," he said, "we don't need to be divided."

It was wonderful to see so many people come out for this swearing-in tradition.  The back half of Nexen field house was almost full.  The front half was used for a post-ceremony reception which gave me a chance to touch base with everyone and offer my congratulations.  I really enjoyed the evening, the setting, the program and the people.

It was the Legal and Legislative team at the municipality that put this event together and I think they did a bang up job.  Also, a big thanks to the Holy Trinity Choir for starting off the evening on a beautiful note!  You guys sounded awesome.

Best of luck to Mayor & Council as you set out on your governance journey.  We're behind you one hundred percent.
Email Post