When a door closes... 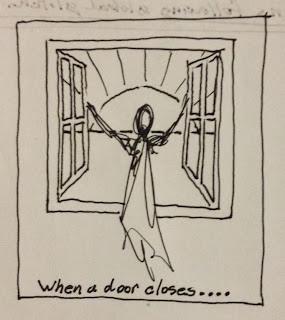 I really didn't think I'd be writing this blog post.

The results of yesterday's election were unexpected, but illustrative of Fort McMurray's desire for change.  Thankfully, I had mentally prepared for not winning, so I was somewhat able to process on the fly as the results started streaming in last night.  It was a little hard to see on the television as the bar graphs zoomed by way too quickly, so it really didn't sink in until after 9 pm that I was well back of the pack.

I'm grateful for the friends, supporters and family that surrounded me as I came to grips with my new reality and this new day that is before me now.  I have experienced many other course shifts in my life, events that on the surface could be viewed as failure, but in every single case were blessings, gifts from God taking me to a new and better place.  I choose to look at not getting re-elected in this way.  Yes, a door has closed, but windows have opened and the breeze is blowing freely through my heart.

Heather, Dylan and Ben have been so supportive, encouraging, and loving through all of this.  I am overcome with gratitude for them.  I could tell they were waiting for the tears to fall last night as it became clear that I had lost, Ben particularly.  Tears will eventually come, because there is something to grieve, the loss of something truly special.

We headed up to the mayor's party after everyone went home, to give our congratulations and thanks.  Melissa was the first person we saw.  It was a hug that I will never forget, imbued with the mutual respect, admiration and friendship that we have for each other.

It was almost impossible to sleep last night - my head and heart were swirling.  Phil Meagher probably had the best idea.  He went out and took down a good number of his signs into the wee hours of the morning.  I eventually gave up trying to sleep and got up for a bit, catching up on messages that were coming in on email, Facebook and Twitter.  Thank you to everyone who took the time to reach out with some of the kindest words I have ever read.

I'll spend the day taking down election signs with some friends, cleaning up the detritus that has gathered in the garage from putting together the campaign.  The signs will get cut down and put in the plastic recycling bin - they will not live to see another day; they have served their purpose.  The wood will get stacked carefully in the back, possibly to be used for a similar purpose down the road, if not for me, perhaps for someone else interested in taking the plunge into public life.

Beyond that and into tomorrow, I'll continue to do the things I've always done: writing blogs, sharing on social media, championing the arts, supporting the social profit sector, facilitating, learning and loving life.
Email Post