We are at the stage in the process where you're not going to see pictures of what is happening on stage or off.  Now that we're dealing with both set and costumes, we have been asked to not share them with the world until the show opens.  I snapped a few yesterday that I wish I could share, but they will need to stay cloistered until the big reveal happens next Friday. 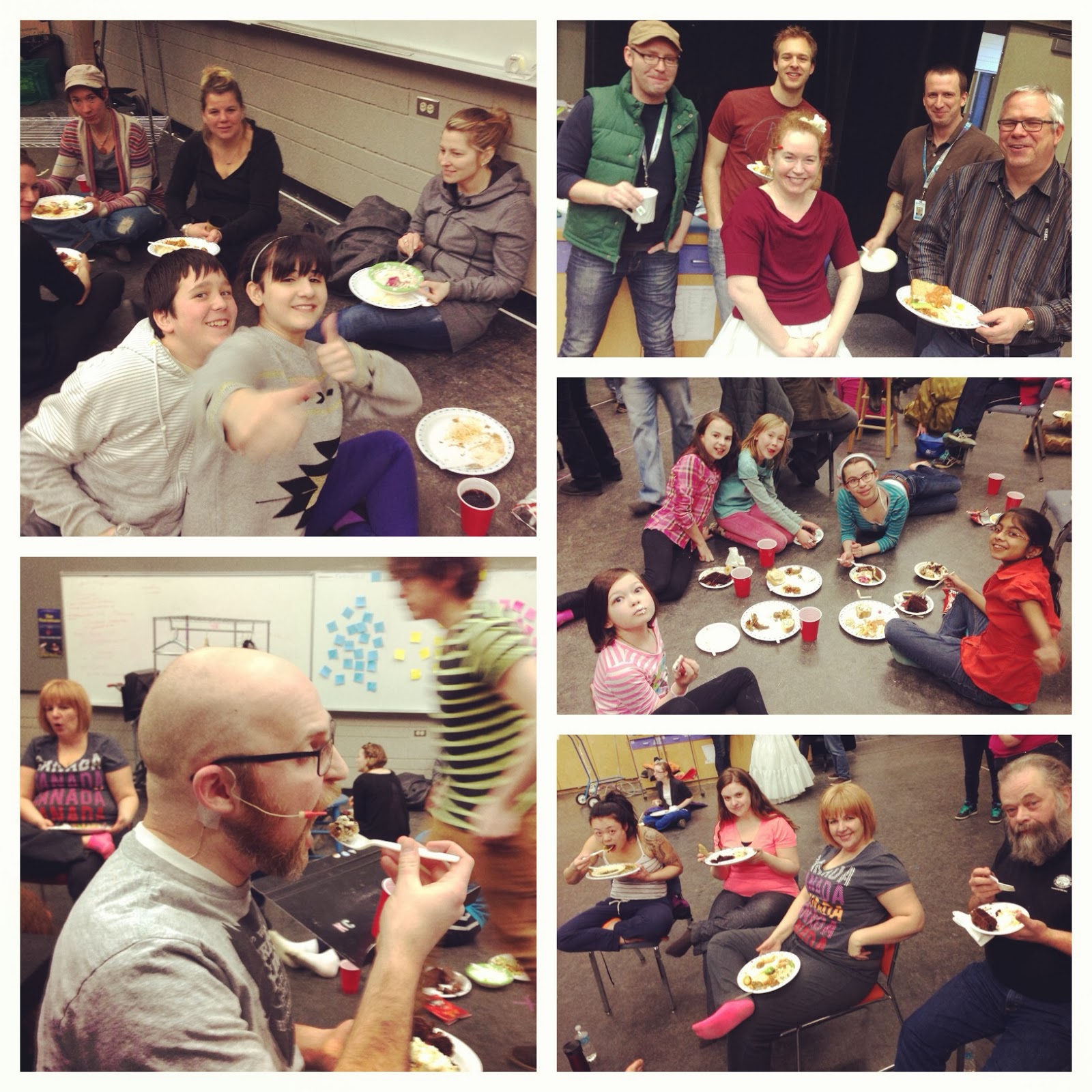 Pictures that I can show are of our cue-to-cue potluck lunch, which turned out to be a great success.  We had more than enough food, drink and desserts to feed the 70 of us, and we saved a pile of time by not having to dash off to the neighbourhood restaurants. 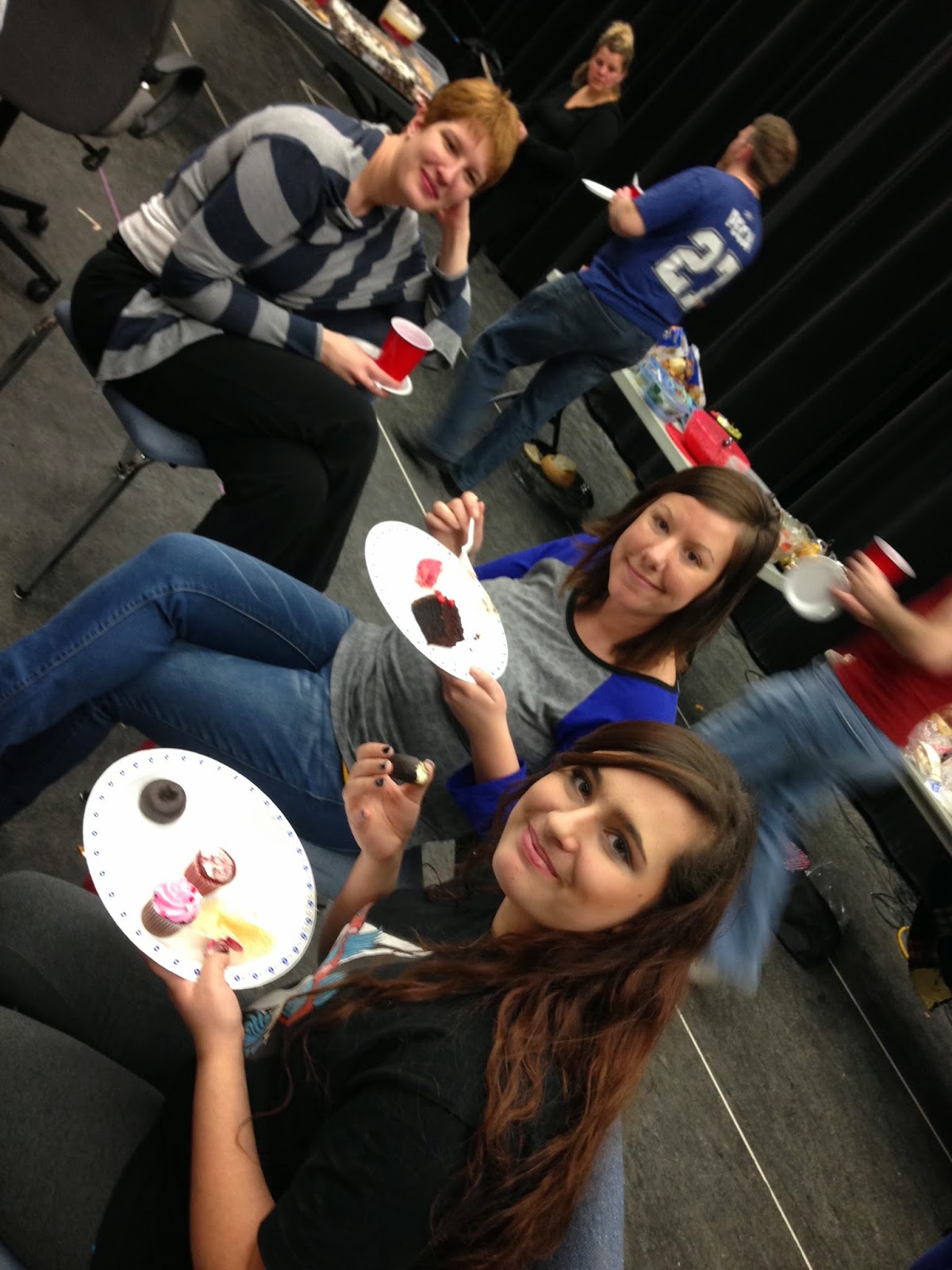 It was nice to sit down and chat with cast and crew mates over a nice meal.  I enjoyed visiting with Timothie, an actress in grade 9 who is part of our youth ensemble, also a very talented visual artist.  It was also nice to run around the room taking snaps of the various groupings of people. 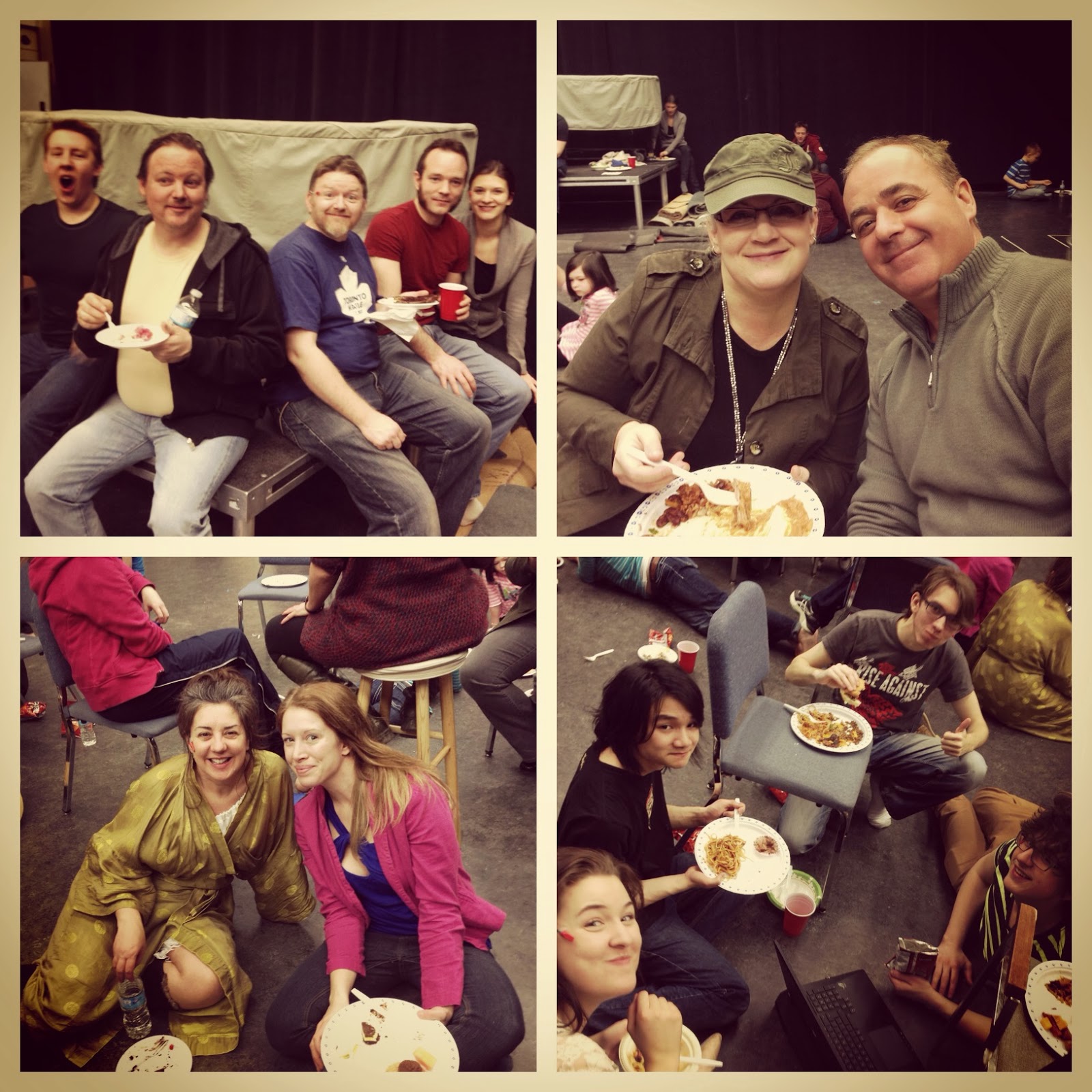 The beginning of cue-to-cue meant the addition of a number of backstage helpers to the fold, awesome volunteers who help actors with incredibly quick costume changes.  Bodies fly by in the hallways as scene transitions happen, trying not to run into one another, bounding to the spot they have carved out to expeditiously flip out of a dress or suit and slip into the next costume piece in time to return to the stage.  By the time we open, this frenetic movement of people while be predictable and efficient.  Right now, it's like rush hour with a sheen of black ice on the road.  It would be amusing to mount a video camera on the wall at the junction of the hallway that runs parallel to the stage and the hallway that leads to the green room.  That is the Times Square of backstage land. 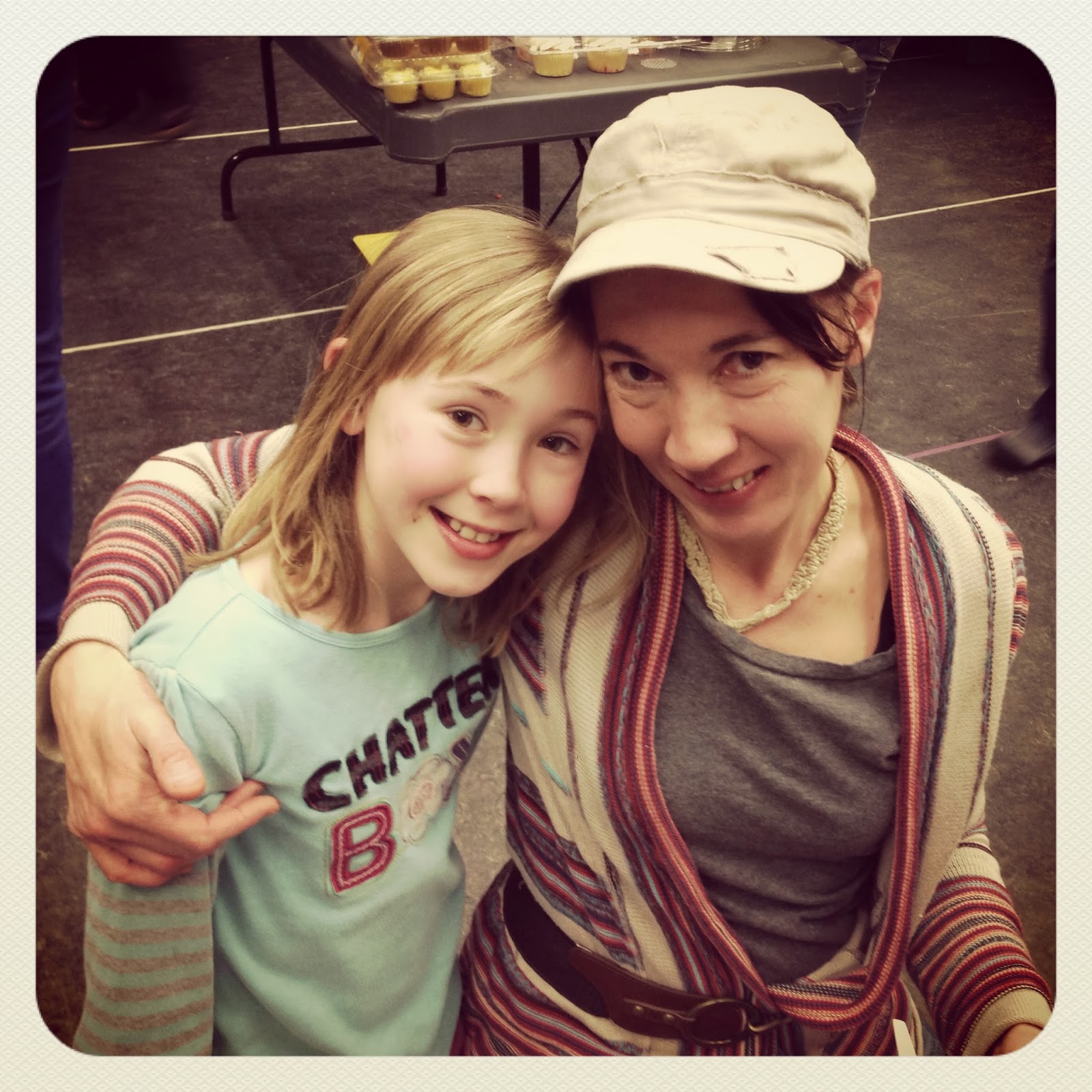 In any case, it's great to have Leanne, Liz, Trena, Teresa, Rebecca, Lezlee and Katherine with us.  They have immediately became integral to the process of keeping this show moving along.  It's also nice to have Michelle Fan back, a microphone tech from Westwood High School I believe.  She works closely with Samuel Chang and Scott Weber to manage the delicate tango of wireless microphones that get switched from actor to actor to actor during the course of Les Mis.  One wrong step here, and solo bits wouldn't get heard and a mad scramble would begin to sort out how to fix it.

As we head into opening week, there are very few seats left for the first three public showings of this epic production.  At last count, there were less than 20 available for the preview, a situation that we have not had for a long time, not even for last season's box office blockbuster, Hometown...The Musical!  With subscribers switching seats to other nights, openings are popping up from time to time on the two sold out performances on Friday and Saturday.  Your best bet right now is to dive into the following week, with shows on Tuesday, Wednesday, Thursday, Friday, Saturday and Sunday.

I get a little misty-eyed thinking of that closing show.  As often happens with these productions, I've grown incredibly fond of these amazing people I get to work with every day, people who invest so much of their time, talent and energy into making the magic come to life.  And while I will be glad to return to a normal life and a regular schedule, I will miss our daily encounters and this incredible journey "To the Barricades."

The last word in this blog series will go to the members of the cast and crew of Les Mis.  Those who choose to share what this process has meant to them, will be featured in "To the Barricades, Epilogue". Watch for that posting, as it is sure to inspire smiles, laughs and a few tears.

As I type, lighting director Alan Roberts is working on "hard notes", which I learned last night are very different than "soft notes" that came out of yesterday's cue-to-cue session.  "Soft notes" are changes that are made electronically: the light levels, timing, colour, etc. - stuff that Alan can do sitting at his computer.  "Hard notes" require a physical adjustment to the lighting instrument, where it's pointed and how it's focused.  I love the fact that I've been doing this stuff for over 25 years years and I still manage to learn something new every day.

We will likely finish off cue-to-cue this afternoon and move into a run of the whole show this evening, with all the bells and whistles.  I can't wait!
Email Post