Go to bed people!  I'm on Facebook at almost 4 am, waiting to drive Claude to the airport so he can catch his flight to Hawaii, and numerous members of the cast and crew haven't gone to bed yet.  Social media is a pretty good indicator of our nocturnal habits, including that of my eldest son - now 15 years of age as of midnight - who was up at 3 am commenting on the barrage of Les Mis oriented postings.

What a night!  What a response!

I heard a lot of interesting comments:

"I could have been a whore," said Michelle Ploughman, from Hometown...The Musical!, admonishing herself for not auditioning.

"I was surprised by Javert," said my wife.  "He was like a thousand percent better than Russell Crowe!"

"I was sitting in the second row and I loved it when you (Thenardier) began high-fiveing people in the front row at the end of Act One," said Ben Smith (Chuck's son - who looks remarkably like Chuck - go figure)

"It was so nice to have the pit down again," said Steve Reeve, appreciating the sound of our awesome band.

People always say nice things on Opening Night, but there was a tenor to tonight's comments that was distinctly different, more authentic and visceral.

For Ashely Laurenson, the scene that floored her the most was when the cart was rolled across the stage containing a number of dead bodies.

"Gavroche was on that wagon, eyes wide open, dead as a door nail.  I swear she didn't blink.  It was chilling."

"And the sound of that cart," added Steve Reeve, "it totally added to the intensity of the moment."

I love it when people get that specific about the scenes that move them.  For me tonight, it was what we lovingly refer to the "dead people" scene that got me all choked up, that moment in the show when Valjean dies, walks up the stairs and meets Fantine, Eponine, Gavroche and the Bishop in heaven.  I felt my mémère on the stage in that moment.  There were tears.

Opening Night began with a special moment on the stage, after curtain call but before the house opened.  Chuck had been surrepticiously getting the cast and crew to sign a "2-4-6-0-1" shirt for Tim Heggie (Valjean) that he had purchased in Toronto a few weeks back when he saw the touring version of Les Mis.  He framed it up and recruited Noah, Tim's son, to make the big reveal, with the help of my son Ben. 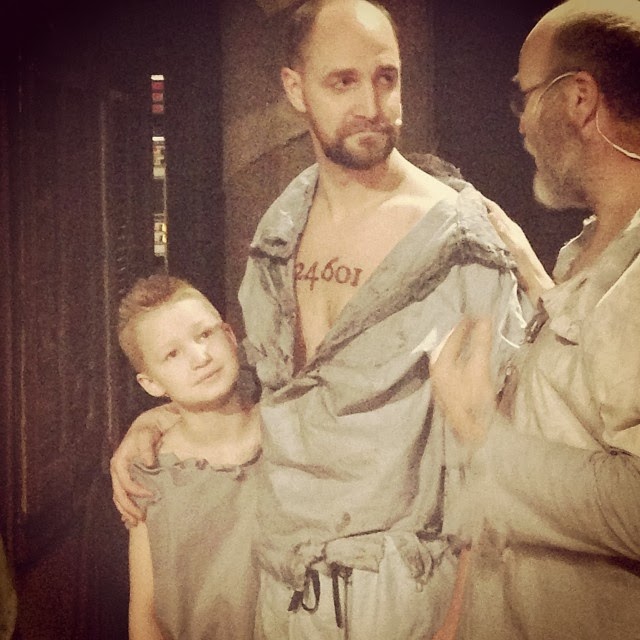 I wish I could remember the exact words that Chuck said, because they were both eloquent and heartfelt, but I don't.  In essence, he acknowledged Tim for taking on the role of a lifetime with such commitment, generosity and love. 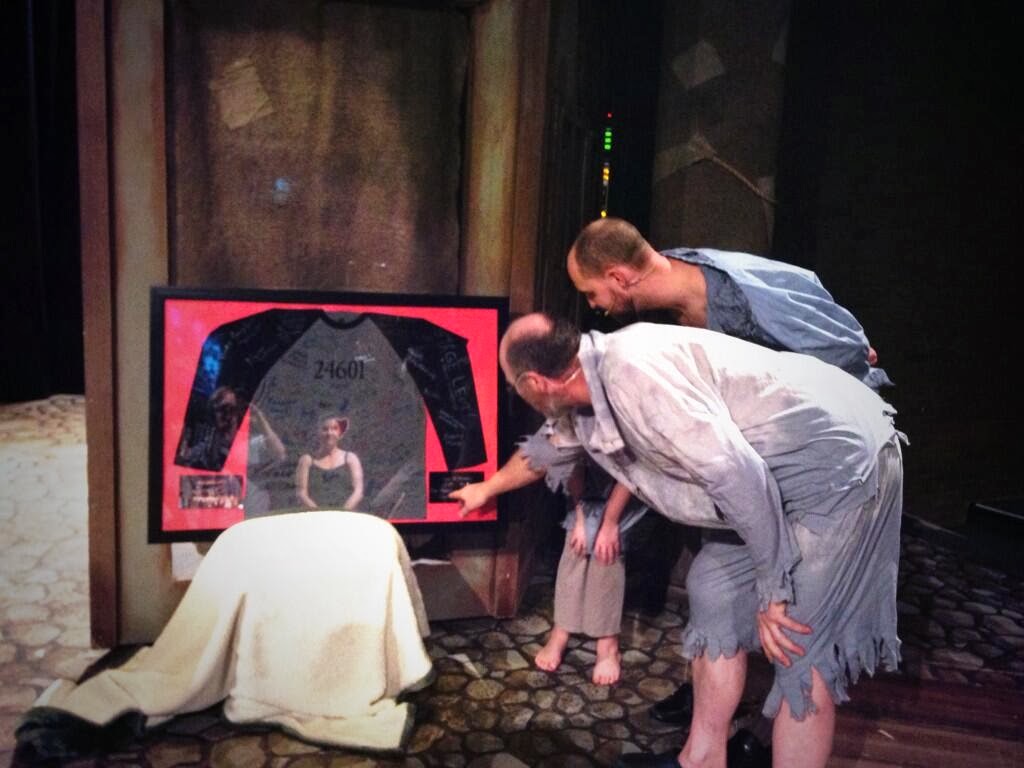 It was an enormously emotional gesture, and a memory that we'll collectively archive in our hearts forever: Noah looking up at his father with unabashed pride as Tim's eyes filled with moisture.

I got to meet Gavroche's grandma, Sheldon's dad, Holly's mom, and so many others in the flurry of fun and excitement that followed the exultant standing ovation on this amazing Opening Night.  It such an honour to bask in the glow of appreciation and love for the power of live theatre and the impact of Keyano Theatre Company.

Claude will wake up in a few minutes, trudge up the stairs with his suitcases, and be surprised to see me awake typing away on my laptop.  I'll drop him off at the airport and he'll begin a long day of travel having had about two hours of sleep.  We'll miss him, all of us.

What he has done with KTC as artistic director over the last few years has been remarkable.

I was talking with a colleague today who hasn't been to the theatre in a long time.  She hasn't even given it a moment's thought, until I started pushing the absolute necessity of seeing Les Mis.

It turns out she saw the show-that-must-not-be-named during the "dark period" when the quality of many of the productions was about as appetizing as what Thenardier likes to put in his homemade sausages.  She had such an unappetizing experience that she just hasn't been back.  Les Mis is going to change that.

All Shook Up, The Farnsworth Invention, Chicago, Private Lives, Boeing Boeing, Calendar Girls, Extremities, Hometown...The Musical! and several other amazing productions in the last few years have returned the light to Keyano Theatre Company, and the sense that anything is possible.  Claude has been a big part of that culture shift.

Just a couple of years ago, I doubt that any of us would have dreamed of being able to do Les Mis, let alone a version of it that is this good.  It's amazing when you bring a team of like-minded and determined people together and take on an epic challenge.

Remember when assistant music director Dianne Pare said "Are you as nervous as I am?"  I suspect as she beautifually beamed in the lobby tonight her question would have been slightly different, perhaps: "Are you as happy as I am?"  I would hazard a guess that the answer would be a resounding "Yes!"
Email Post