Ask and you shall receive

I went into my 13 year old son Ben's bedroom last night, just to check in and say hello.  It had been a long day at work and I wasn't able to connect during dinner.  It was then I noticed two drawings taped to his wall above his desk.  One was a striking capture of a beautiful lady, the other an old man smoking a cigarette.  Both garnered my complete attention; I was awestruck by their beauty. 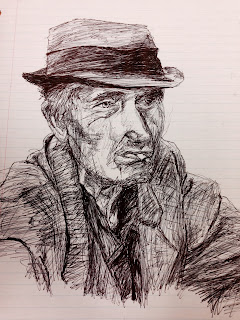 I went back in a few minutes later to ask if I could take a photo of the old man drawing.  He said that he had already taken one and that he would email it to me.  After it arrived, I asked if he would allow me to share it on my Russell Thomas Art Facebook page and on Instagram.  He said yes, but I'm not sure how to describe how he said it.  His approval was given somewhat begrudgingly, as if he was placating my incessant desire to share.  Or, maybe that was only what he was projecting; maybe deep down inside he was looking for some feedback.  If the latter is true, then the community of people who follow me have spoken, loud and clear.

As of this morning, the single post on Facebook has reached over 7,000 people with comments that range from "WOW" to "Amazing!"  "It's as though this man is coming off the page," wrote Una.  "The image sends out a feeling, like I want to ask 'What's on your mind?'" shared Nicole. 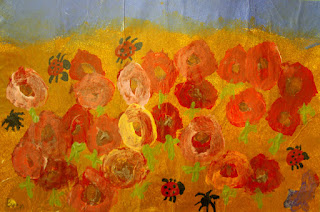 Ben has had an artistic ability since he was very little.  I spoke about a painting he did, shown above, during a TEDx presentation I made probably 5 or 6 years ago.  He has an undeniable gift that has lifted my spirits on many occasions over the years.

I asked for feedback, on behalf of Ben, and the world responded.  I also asked something else last night. 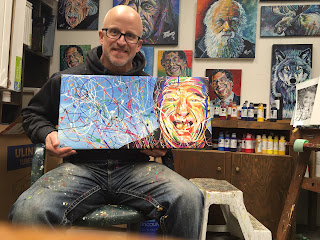 It had been a long time since I had done a giveaway on my page, so I decided to pay forward one of my canvas prints of the Robin Williams painting I did on the day that he died.  The ask was simple: SHARE ONE PERSON, ANIMAL OR THING that you think I should paint and why. Simple as that.

There has been a veritable avalanche of suggestions, some with remarkably beautiful stories others that make me want to put everything aside and spend the next year in the studio bringing the suggestions to life.

I will do the draw later tonight.  Everyone who shared a suggestion - no matter where they live in the world - will go in the draw.