My week of animals

I had sent my sister Corinne a note last weekend inviting her to return to the studio if she has an interest in finishing the wolf that she had started during a workshop we did over the Christmas holidays. She said that she would pass and if I wanted to repurpose the canvas that would be good with her.

That led to the wolf painting that I shared in an earlier post.  I had so much fun with that one that I thought I might as well drag out Thomas's canvas of the owl.  I spent about 30 minutes on it the first evening, before closing up the studio for the night.  I finished it up the next evening. 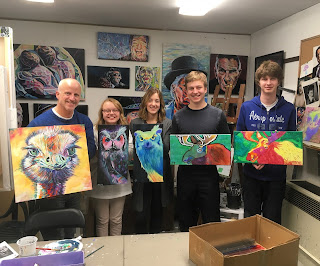 The third animal painting that was hanging around was a portrait of a moose by my nephew Matthew.  I quite liked his rendition, but thought I would make it a trio.  How I went about bringing out my moose from Matthew's was pretty typical in terms of my process.  However, the setting was completely different. 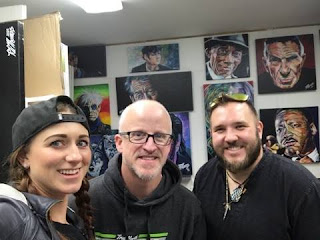 Ty and Heather had reached out to me a few weeks earlier to join them on the PShit Podcast.  They picked me up yesterday afternoon and brought me to the studio, an amazing space used by the makers of Punch Drunk Allies.  Instead of just sitting and talking about my painting, I thought I would multi-task and paint something during the interview.  Matthew's moose proved to be the perfect choice. 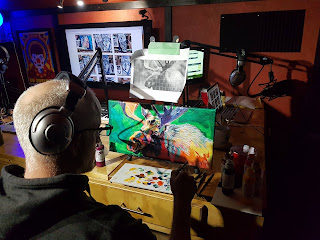 Wearing headphones, talking into a microphone and painting seemed like the most natural thing in the world. Ty and Heather made it easy, as they did a fabulous job making me feel comfortable and keeping the conversation rolling. 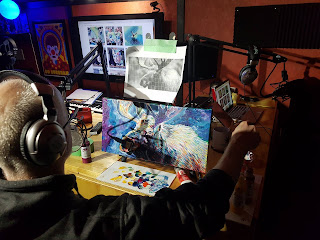 Ty is originally from Toronto, a former forensic investigator turned comedian and podcast host.  Heather is from Newfoundland and works as a safety coordinator for a local contractor.  They are four episodes into their PShit Podcast with some exciting things coming up in the future. 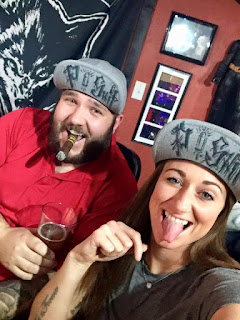 Their shows are usually freewheeling in terms of language and content.  They kept it tame for me and will be publishing it as family friendly content a 4 to 6 weeks down the road. 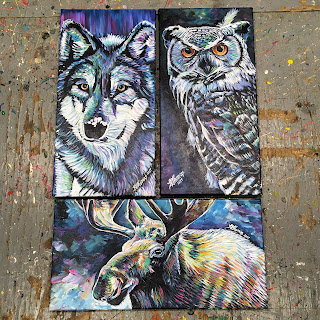 The final touches on the moose happened yesterday.  I took it, along with the owl and wolf, and positioned them on the paint splattered floor of Birdsong Studio and took a picture which I posted on social media asking people to pick their favourite.  It's been fascinating to watch the responses.  The owl appears to be getting the most votes, but some people are equally effusive about the wolf and the moose. 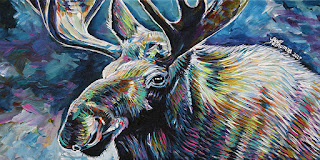 They are all available for purchase, though several enquiries and offers have come in for each over the last 24 hours.  They may not last long.  If you're interested, send me a note on my Russell Thomas Art Facebook Page or send me a text: 780-881-3752.
Email Post