I was having a blah day on Friday.  The weather had finally turned warmer but cloud cover muted the enjoyment of it.  Also, the birds were silent; I guess they were waiting for the sun to come out like the rest of us.

At some point in the afternoon, just before heading up the hill to my live painting gig, I called out to my raven.  It felt like a futile endeavour as I hadn't heard any of their familiar caws in hours.  Seemingly out of nowhere, he swooped in, not just to the safe confines of the branches of the Manitoba maples but to the edge of the roof, then down into the garden only fifteen feet away.  We had a quick little chat before he flew away.  That was the closest he had come to me so far. 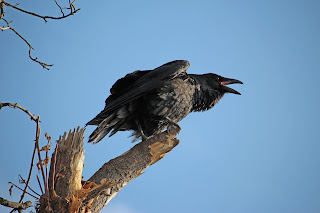 My raven friend has a number of favourite branches and calls.  I can be hard at work on a painting in Birdsong Studio with the music turned up loud and I'll still hear him.  Several times through the weekend he called, as if wanting me to come out and visit.  Caws turned to much more personal guttural clicks and vocalizations. 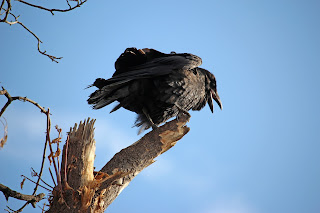 On one occasion he was on a broken branch just above the studio, talking up a storm, and I grabbed the camera and started shooting.  The conversation continued as I snapped. 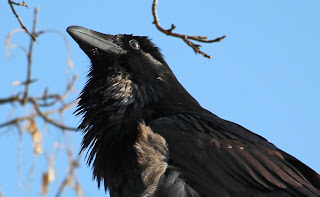 I regret having largely ignored ravens most of my life.  This realization begs the question of what else I might have ignored along the way.
Email Post