The character of a car

There have been a few times in this journey of 525 paintings when I've accepted commissions that scare me.  I put each of them off until the last possible moment, waiting for inspiration to strike.

The first subject that jumps out to me was an urban landscape of two lovely ladies skating on the Rideau Canal in Ottawa.  It was a project so far removed from what I normally did, though something I had an inkling that I wanted to try: urban landscape.

The painting went a certain distance, at which point I shared it with an artist friend of mine from Grande Prairie, Grant Berg (www.grantberggallery.com). 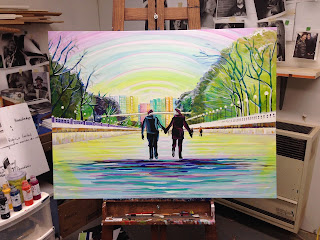 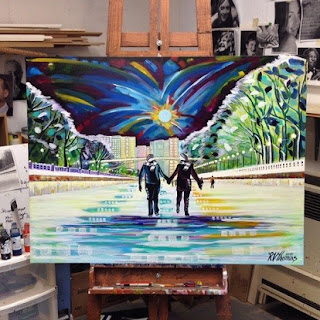 That slight suggestion made all the difference in the world.

Another project that jumps out was my first solo dog portrait.  I was scared stiff to paint Finnigan until I looked at the work of an amazing artist named Eric Staub.  (www.paintingsbyericstaub.com) One glance at a fun portrait he did of a great dane unlocked something inside my brain that ended up inspiring a painting for Maryanne and Brad. 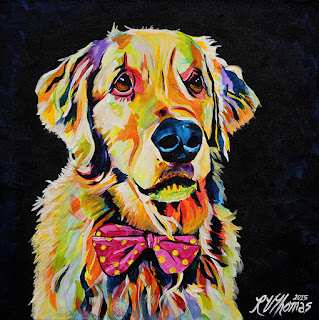 I had similar feelings of trepidation and avoidance as I spent much of the week sketching out a large portrait of a Shelby, a high performance Fort Mustang that is much coveted by auto aficionados.  However, I screwed up my courage yesterday and dedicated the full day to "working the canvas" and "trusting the process". 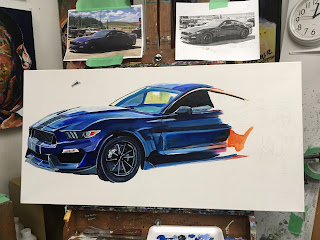 The car came together quite naturally, which surprised me.  The background was a little more challenging, in terms of finding the right colour balance and light values. 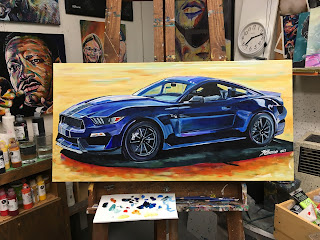 In the end, it turned out pretty good.  Based on the higher than normal number of likes on Instagram, it appears to have hit the mark with some folks who love their sports cars.

When you zoom in close, there is no attempt at perfection in this painting.  It is still rather loose and contains various shades of blue, green, and magenta.  I wanted to set the car in the middle of a blazing hot desert to make the blue pop off the canvas.  It is an inanimate object, but the car and its various lines, curves and reflections communicate character.  Apparently, several local folks are owners of this particular brand and started asking the question:  Is this so and so's?

Painting cars is not my thing, but I said the same thing about animals when I first started.  You never know where this one commission request will lead.
Email Post