In the zone with JFK

It has been a 12 hour day at the office.  We were all hands on deck getting prepared for the Annual General Meeting of the United Way.  It turned out to be a great success, but the work to get there was pretty intense, so by the time I got home I was sacked.  As I am known to do, I went horizontal for five minutes after a quick dinner before going out to the studio.

I had sketched out a portrait of John F. Kennedy the night before; painting it would be my reward for a job well done at the office.  In the moment of setting out to start I had this flash of courage to try something different.  Instead of diving into the face with my usual process, I began with the background using a technique that I saw Dominic Matiolli share the other day.  Dominic is an amazing young artist from Florida.

I poured some colour on the canvas, then moved it around with a knife.  Then I dribbled another colour, then another, and another.  By the time I was done, the sketch that lay under the colour was completely gone. 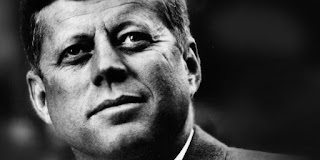 "Screw it," I said to myself.  I just grabbed my Payne's grey and started painting his hairline and the defining features of his face. The underlying colours were still pretty wet by this point, so it created a very interesting look.  As the first layers started to dry I went over top with additional colours and quickly brought the portrait together. 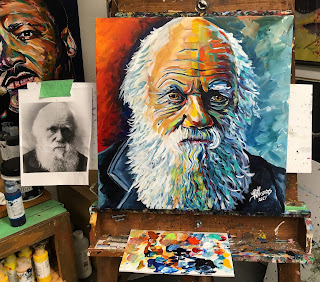 There are moments when I am so "in the zone" that I lose all awareness of time and space.  When I look back at my various portraits, a small few land in this category.  More recently, Charles Darwin took me there. 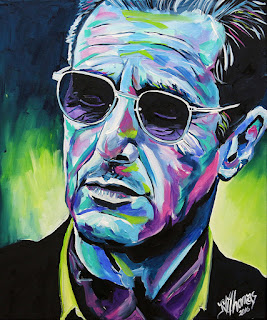 Painting Al Pacino as the Godfather just exploded onto the canvas.

The Robin Williams portrait just seemed to paint itself. 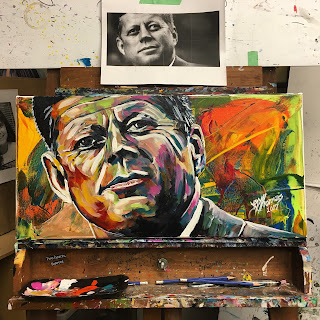 This portrait of John F. Kennedy, inspired by the spirit of community and vision that I saw at our Annual General Meeting, emerged from a place deep inside me that believes that anything is possible if you plant your flag on top of the mountain so everyone can see it.  President Kennedy challenged the world to shoot for the stars; and they did.  I like to think that we still can.
Email Post