From a blank canvas...

I got another order of canvases in yesterday, a large box that arrived from Opus Art Supplies in Vancouver.   Going through four to six canvases a week - more during weeks when I host workshops - I need to replenish my canvas inventory on a very regular basis. 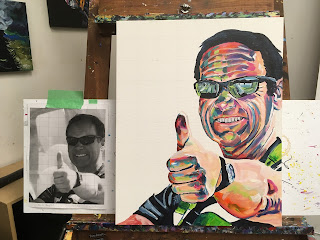 There was a time, many years ago, when the thought of an empty canvas was a frightening thing.  After over 500 works in less than three years, ripping open the packaging for a new canvas has become like brushing my teeth.  Any fear I had as a younger person about starting a new artwork has disappeared by doing it over and over and over again. 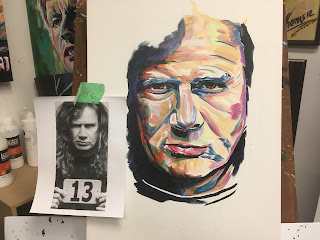 This part of my life is about creating something from nothing.  A blank white canvas becomes a person, an animal, a scene, a study; it becomes something completely handcrafted and one of a kind.  The fear I felt at the beginning of a project in the past, I now feel in the middle of the process, when the work has not "crossed over" from a sick looking mess to an inkling of something you might recognize.  There is a spot in every project when the subject emerges from the canvas.  Before that point, it can be very frustrating and stressful.  After that point, it is just a matter of doing the work to bring the piece to completion. 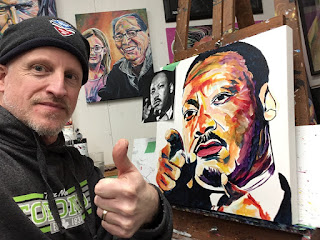 I have a very difficult time leaving any project for the day before the point of crossing over.  In fact, there are probably only a handful of times when I've done that: gone to sleep with a project being an utter mess.  It's just not a good feeling. 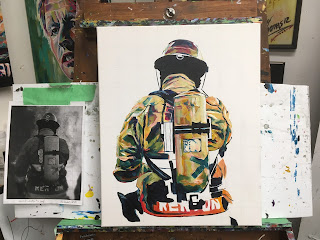 As an example, I have three different pieces in progress right now: two commissions and one painting of Walt Disney.  All three works have definitely crossed over; all they require are the hours of work required to get them done.

Every day, I get to turn a blank white canvas into something colourful.  It is an honour that I treasure and a passion to which I am deeply committed.  I'm slowly getting better.
Email Post