I love when I get surprised by painting clients.  They don't mean to do it, but sometimes little details or connections get left out during the commissioning phase, or don't get picked up by me in the little snippets of communication that we have in the lead up to a project.  Some of these surprises really put things into perspective for me. 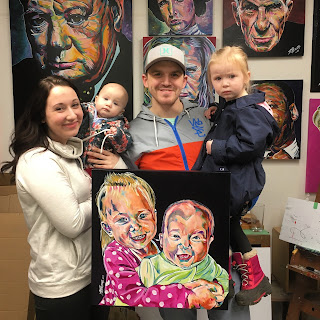 I painted Kambria and Juniper last month for Josh and his wife.  As it turned out, Juniper is actually a "fire baby", born while on evacuation from Fort McMurray.  Enough time has passed since that terrifying event to grow a beautiful little person. 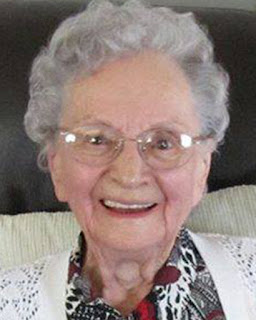 Kyle and Kim Borle asked me to paint Anne as a gift for Kim's mom as a thank you for all that she does.  Anne was her grandmother; they were incredibly close.  They wanted to bring Mom over to the studio to show her the finished portrait, which they did on Friday.  Kim's mom knew they were having trouble finding the place, though she was still in the dark as to why.  When they turned on to Demers Drive, she started to have a niggling.

"Are you looking for Russell Thomas's place?" she asked from the back seat.

Mom knew exactly where we lived as she had been to our place multiple times.  You see, Mom was Debbie.  In more recent times, Debbie has done lots of stuff with my wife.  In more distant times, Debbie and I volunteered together with interPLAY.

"Do you have any idea why you are here?" I asked Debbie once everyone was in the studio.

With Kim sharing the moment with her distant brother using her phone and the wonders of modern technology, I uncovered the portrait of Anne Palinka.  Debbie's reaction was immediate and very emotional.  Her grandmother meant the world to her and she misses her so much - she passed away about 5 years ago. 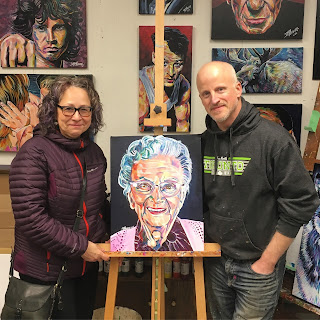 I'm glad I didn't know the connection between this project and Debbie.  That ignorance paved the way for a beautiful moment and a heartfelt reminder of why I devote so much time and energy to painting.

In the background of the above picture you see several paintings belonging to Ken.  A young Gordie Howe is directly behind the easel with Jim Morrison to the left.  These two pieces along with a small portrait of Robert De Niro were a part of my Wild Colour Portrait exhibition that ran from November through January.  It was very kind of Ken to lend them to us so we could share them with the community.  What I didn't know until yesterday, when he and his sons came to pick them up, was how fortunate we were still have them.

The paintings of young Gordie Howe, Jim Morrison and Robert De Niro were in a basement suite on May 3rd while Ken was out at work, several kilometres out of town.  The basement suite was in a neighbourhood called Beaconhill.

Ken didn't have a vehicle with him at work that day, and getting a bus back to town was not looking to be likely as the world had turned upside down.  Instead, he caught a ride with someone heading that way.  As they made their way on the slow crawl south through town, Ken asked to be let out on the highway going up Beacon Hill.

"I'll just run up the embankment," he said.

As he scrambled up the hill, the raging fire of several hours earlier, had turned into a smouldering wasteland.  He walked through streets now unfamiliar, landmarks turned into steaming piles of ash and ruin.  Eventually, he began to approach his street where, off in the distance, he saw one or two houses standing, then another, then.....his house.  It had been left largely untouched.

Ken was able to pile a bunch of things into his truck, including the paintings, and head south to safety.  The danger in the community was far from over and he didn't know if this reprieve from disaster was going to last; nobody did.

This entire journey really isn't about painting or colour or brush strokes.  It is about people, feelings, memories, associations, stories, and love.  What I get to do is a small part of the greater whole.  I'm grateful to be a part of it.