18 days to build a house

For the last 18 days I have been waking up at 6 am, pulling a prompt from a hat, and painting something that speaks to it.  My original intention was to have the painting completely done by 9 am.  In quite a few cases, I spent extra hours throughout the day making sure that I was happy with the finished product.  In that sense, I adapted the rules mid-game.  As I'm the only player and there are no winners or losers, that's OK.

One of my goals was to shift my sleeping pattern.  After we returned from southeast Asia, I found that I was consistently sleeping in until 7 am or later.  I was missing out on the best hour of the day.  The 18 Day Painting Challenge successfully helped me get back into my regular, and comfortable, morning routine. 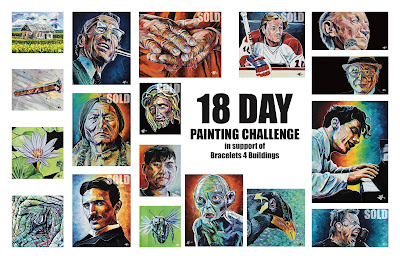 The other higher level goal was to shake things up artistically.  Responding to a prompt and getting out into the studio early in the morning helped me go to places that I haven't been before, both in terms of subject matter and colour.  When I look back at the body of work, I see the growth and evolution that I had hoped for.  I also see a process - a challenge - that was both motivating and productive. 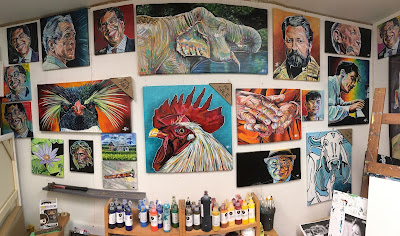 Very early in the process I had to make a decision about what to do with the 18 paintings that I would be creating.  I knew that space was quickly going to be an issue; Birdsong Studio was already bursting at the seams following a productive Christmas season.  I decided that I would sell the works one of two ways.  People could chose to buy the piece outright, at the regular price, or they could wait and take their chances in an online auction that would happen at the end of the challenge. Six of the 18 pieces sold to people that absolutely wanted the paintings right away.  A few more may sell that way before we kick off the online auction (hopefully tomorrow).  The auction will run through the upcoming weekend and close at 9 pm MST on Sunday, January 28th.  Stay tuned for details. 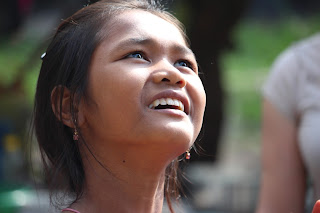 All the proceeds from all the sales will support our next house build with Bracelets 4 Buildings (B4B) in Cambodia.  I am convinced that the total of all the sales will allow us to fundamentally change the lives of a family that is living in a less-than-ideal shelter right now.  In the interest of full disclosure, I have been so taken with the work of B4B, that I have agreed to join the charity's small board of directors, now made up of two Americans (Lee and Tim) and two Canadians (Kent and Russell). 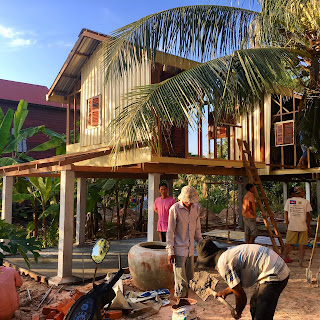 It is important to note that when we say we are going to build a "house", it is not a house in the first-world Canadian sense.  These structures, built in the Cambodian style, are very simple.  In the case of B4B houses, they are one room elevated structures that provide a safe, secure and comfortable place for the family to sleep.  Much of their day-to-day living takes place in the shaded area created below.  These homes come with windows and a lockable door.  In many cases, these people have never been able to secure their possessions.  Getting keys to their new house is a huge deal. 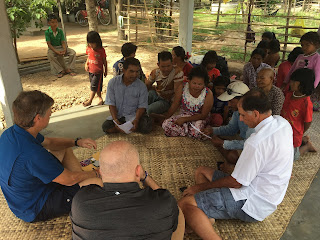 We also make sure they have access to a well built washroom, which also double as a washing facility.  The approximate cost of one house, not including travel and accommodation expenses for us, is $3,000 USD.  B4B does everything it can to stretch every dollar to maximize the number of houses we can build every season. 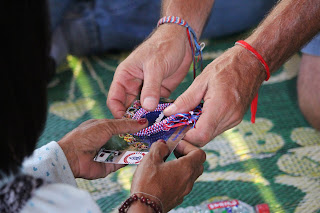 If everything goes according to plan, after 18 days of painting we will be in a position to build a house in November/December.  My thanks to Leigh, Maggie, Robbie, Stephen, Tamara, and Jody who got us off to a great start with their purchases.  If you want to grab one of the remaining pieces before the auction begins tomorrow, send me a note via my Russell Thomas Art Facebook page or send me an email at russell.thomas@birdsongconnections.com.
Email Post