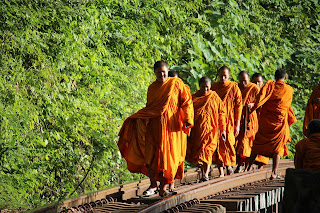 We saw lots of monks when we were in Thailand and Cambodia.  Considering the thousands of Buddhist temples scattered throughout the cities and countryside, it is no wonder the peaceful fellows in their bright orange and yellow robes were everywhere.  In the tiny village where we were building houses with Bracelets 4 Buildings and several local construction crews, there was a rundown temple, in desperate need of some love - the rural temples get far fewer resources than the splashy ones in the major centres - and a really good clean.

The community had a major celebration of some kind on the grounds of the temple in the weeks prior to our arrival.  It must have been quite a time, because the amount of garbage that was left behind was quite remarkable.  One of the hardest things for me to wrap my head around was the copious amount of bits and pieces of everyday life that end getting tossed into the wind.  The grounds of the temple were simply like the rest of the village. 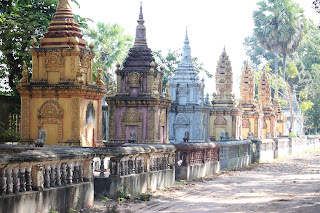 The local temple is home to 11 monks, including the one who made an appearance at each of the four blessing ceremonies that Heather and I were able to enjoy during our time in Cambodia.  All three monks would arrive at the appointed time, either riding on the back of a motorcycle, or if they were close enough, walking over from the temple.  With bright robes (all different hues of orange and yellow) and bright smiles they would ascend the steps of the house being blessed and sit in a row along the south facing wall.

Eventually, the canter would get things rolling with help from a cadre of village elders, and the blessing ceremony would start. 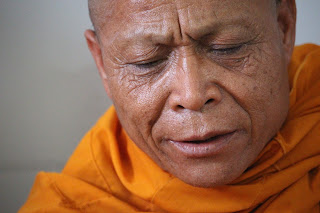 I took this portrait during the first blessing ceremony at Vav's house - a recipient who put in a lot of sweat equity into the construction of his home.  He proved to be such an excellent worker, that he was hired on to help build several other houses. 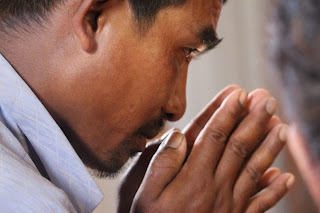 As I sat in the small home and listened to their chants, taking in the scene, and the various people, young and old, who had crammed into the 13-foot by 13-foot space, I was moved by the sense of peace, gratitude, love, acceptance, forgiveness, and community. 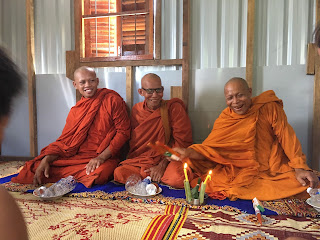 At one point in the chanting, one of the monks must have messed something up.  Laughter and infectious smiles erupted on all three of their faces, as they struggled to get it together.  It was one of my favourite moments on the whole trip. 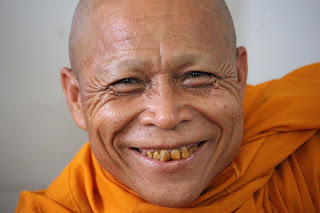 A number of days later I was walking from Mern's house to Chat Tom's when I decided to take a shortcut through the temple grounds.  My favourite monk was descending from what might have been his residence.  I offered a traditional greeting which he returned with his signature smile.

I took out my phone and showed him the portrait I had taken above.  He didn't speak any English, but it was clear that he immediately connected the photograph with the blessing ceremony that had happened several days earlier.  He laughed, quite taken with the fact that his face was on my phone.

I woke up yesterday morning with my monk friend on my mind.  I decided to start my day by starting the portrait that I knew that I would eventually do.

I did two time-lapse videos, one of the first hour, another of the second.

I went back to the painting later in the day and continued working the canvas until I felt the monk emerge. 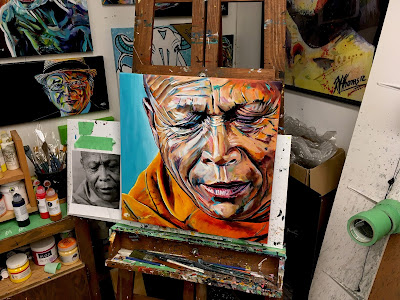 When I look at this portrait, I feel a sense a beautiful blend of peace, balance, compassion, wisdom, and love.