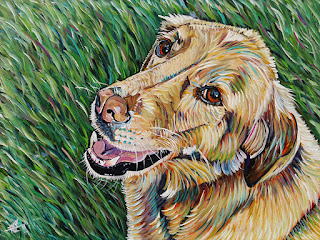 Several years ago, shortly after we had opened up The Redpoll Centre, a young lady named Lauren came to work with the Alzheimer's Society of Northern Alberta and NWT.  In those early days, she was rather shy, so I would make a point of wandering over and saying hello on a regular basis.  One day, she had her door open but something propped up against the door frame.  The reason was that she had brought her therapy dog Hudson into the office.  She didn't want him wandering down the hall.   Seeing him that first time, and all the successive times that he visited The Redpoll Centre was always special.  I let out a tiny squeal each time I looked across the hall and saw him.

My last day of work at The Redpoll Centre was in mid-November.  Cecilia, my boss at United Way, suggested that it might be fun for me to paint a redpoll bird on my last day. 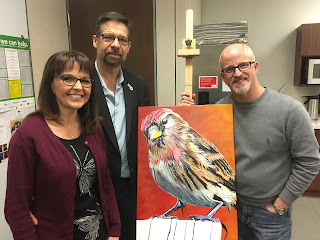 I set up in the lunchroom and painted away as friends and colleagues dropped in to say their farewells.  It was a beautiful day.  One of the last to visit was Hudson.  Lauren had brought him in because she knew how much he meant to me. 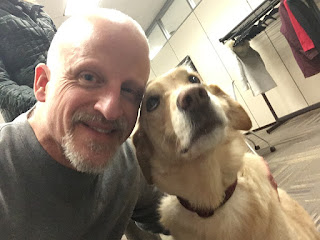 Several days later, Heather and I flew over to Thailand and began our southeast Asian adventures.  I think we were in Bangkok when we received the sad news that Hudson had died suddenly.  A cancerous tumour had erupted.  It was devastating news, especially so for Lauren, who loved Hudson deeply.

Friends came together in support of Lauren and did a couple of things.  They reached out to me to see if I could do a portrait.  They also did a Go Fund Me campaign to help with the vet bills and make donations in Hudson's name to the Paws for People program with CMHA and the SPCA in Winnipeg, Lauren's home town. 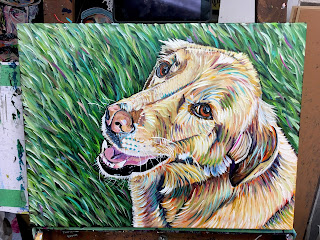 I painted Hudson's portrait on January 8th.  From the very beginning of the project I felt that it needed a background of luscious grass, blowing in the wind.  Everything told me that was where Hudson was happiest.  So, I went with it.

Fast forward to yesterday.  Deprise (one of the friends who reached out to me and who helped organize the Go Fund Me campaign) arranged that I would meet them at the local Canadian Mental Health Association office where they would be making their Paws for People donation with Lauren.  I went early so I could tuck the painting off in the corner.  When they arrived to make their donation, Lauren glanced over to me sitting at the table.

"Oh, Hi Russell," she said, thinking I was there for a meeting or something.  She had no idea that I was there because of her and Hudson.

They made their donation, adding that it was in Hudson's memory, at which point Lauren let the emotions flow.

"While you are crying, we might as well make you cry some more," I said, presenting the painting of Hudson. 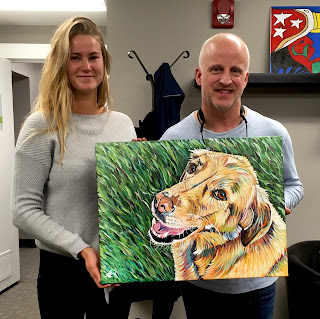 Later in the day, Lauren sent me a beautiful note.  In it she shared the following:

"When Hudson passed someone told me about the Rainbow bridge in heaven.  It’s where all the dogs run in the grass smiling waiting for their owners call so they can walk through Heaven's gate together. You painting him in fresh beautiful green grass means everything to me and is exactly where I picture him in my heart, running and smiling all day."

I can't explain why grass was the only background I saw in my mind's eye, only that it was.  This is a journey where trusting instinct has played a major role.  I am so grateful that the painting reflects Lauren's vision of him running around in the grassy fields of Heaven.  My hope is that every time she glances up at Hudson's portrait on the wall, she is reminded of his love and friendship, and that the reminder brings comfort.