and then there was one...

It is the final morning of my 18 Day Painting Challenge.  What do they say?  Is it 21 days to form a habit?  This morning painting exercise already feels like one.  I wonder what it is going to be like NOT to respond to a morning prompt.  Hmmmmm....

On Day 17, the prompt was "an animal that lives in a tree".  I'm not sure where the person was going who suggested it, but I went to a mynah bird who hung out at the Elephant Haven in Thailand.  When we weren't out in the forest with the elephants, we were under a covered area, protected from the sun. 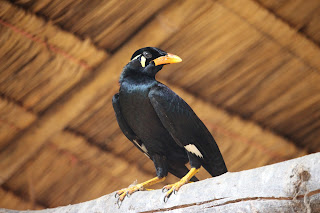 This bird was up in the rafters the entire time, swooping down to get whatever morsels of food had been left behind or accepting offerings from some of the staff.  I got the sense that he was a regular. 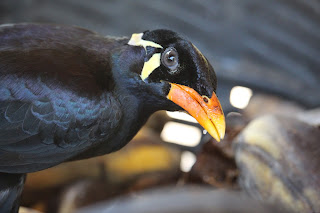 "Is that a raven," said someone who saw what I was painting. 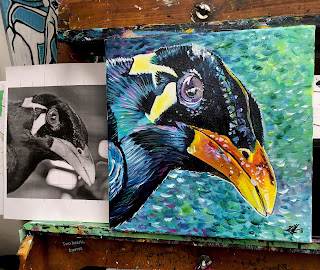 Mr. Mynah was certainly acting much live a raven.  He was deathly quiet when there were lots of people around. You wouldn't stop chatting when it was just the two of us.  Also, structurally there are similarities. Maybe he is a distant cousin.


Now it's time for Day 18 and the final prompt of this adventure:  "a political figure who has positively impacted the world".  I think I'll finish where I began, in my home province of Saskatchewan.  Stay tuned.
Email Post