On Day 10 of my 18 Day Painting Challenge I pulled the following prompt, suggested by followers of my Russell Thomas Art Facebook page, out of a hat: an object that one would find in your studio.  The brain automatically jumps to images of easels, brushes and paints.  Someone even thought I might use the paint-splattered bucket that I have been using to wash my brushes for the better part of two years as a subject.  However, my mind went in a different direction.

I have this railroad spike that has been hanging about the studio the entire time that I have been painting.  It has sat on window sill, up on the shelf and various other places.  I had noticed it the day before pulling the prompt, which is why I could think of nothing else. 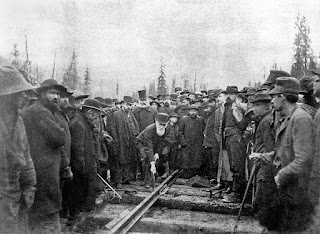 The railroad spike is synonymous with the opening up of Canada.  Millions of spikes affixed rails to ties, allowing people and goods to go back and forth across the country.  This particular place came from one of two places.  It may have been picked up during a family scavenger hunt that we did with Heather's side of the family in Crownest Pass one summer, or it might have been picked up along the tracks in my hometown of Kamsack, Saskatchewan.  Either way, it has been a part of Birdsong Studio for the entirety of this crazy painting adventure. 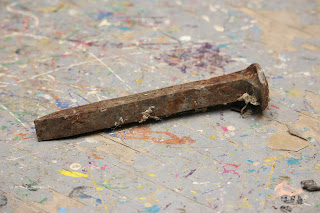 I put the spike on my studio floor, covered in flaking grey paint and splatters from dozens of projects that required me to throw colour at canvas, and took a photo.  I thought it would be interesting to place the object on a background that spoke to the creative space.  Apart from the finished paintings on the walls, the floor tells a remarkable story. 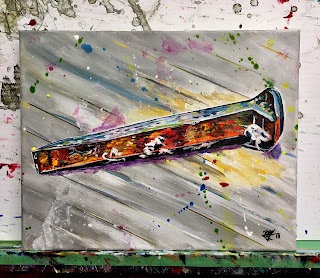 I painted the background first, then applied the splatters, and finally, focused on the spike.  As I had an early start, I was finished the project by 8:30 am.  It was a great way to start the day.

It struck me as odd that in a studio full of object that would scream ART, I chose something else.  I think the reason is that the railroad spike is a talisman.  I've had dozens of opportunities to get rid of these heavy, cobweb encrusted piece of metal.  Each time the possibility of extrication comes up, I hold the spike in my hand, decide I want to keep it, and place it in a new spot.

We were a railway family, growing up in Kamsack.  For a time, it was a major hub for CN.  Things got shifted around the late 1970s, which meant that Dad had to drive to Canora to hop on freight trains that took him to places like Hudson's Bay, Humboldt, or The Pas.  He would get called to work at all hours of the day; there was very little regularity as to when he would be home or gone.  That was our normal.  Mom and Dad made it work, and raised six children who went on to raise 15 grandchildren.  I see all of that infused in this solitary railroad spike, my lucky spike.
Email Post