Give peace a chance

I sat in my studio last night listening to my daily dose of news and information on CBC Radio, first The World at Six, then As It Happens.  Several stories and interviews focused on the latest school shooting down in Parkland, Florida.  I listened and painted, a new portrait of Mother Teresa.

"Where do your inspirations come from?" visitors to Birdsong Studio often ask.  In this case, it was from Twitter.  A former resident has tweeted out a side profile of Mother Teresa.  I only looked at it for a milli-second, but that's all it took.  I got back to my iPad and found a pixelated side profile, printed it and took it out to the studio. I felt this inexplicable need to paint her yesterday, as if someone out in the world needed it in that moment. 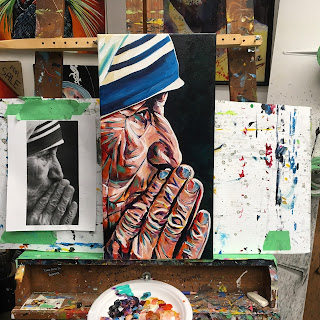 Hope shared her favourite Mother Teresa quote after I posted the first picture on the Russell Thomas Art Facebook page.

If we have no peace, perhaps it is because we have forgotten that we belong to each other.  -Mother Teresa 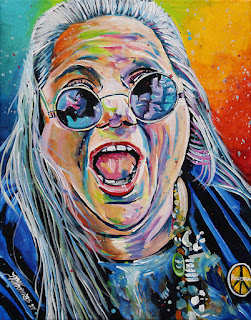 Susan in Calgary (whose portrait I recently painted) shared that 40 years ago she had a dream that she should give up her public health job and work with street people.

"Everyone said 'you're crazy' and my faith often wavered," she wrote.  "So, I wrote Mother Teresa a letter; and lo and behold she wrote me back and told me to 'do all for Jesus, with Jesus, and to Jesus, amongst the poor' - here I am decades later still serving the homeless community.  What a sweet memory your painting evoked in me of Mother Teresa, my pen pal." 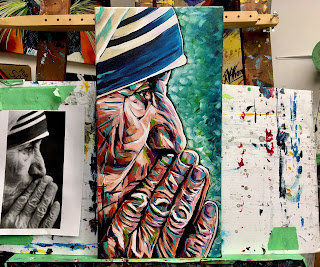 I went back out to the studio after dinner and did a second session with the beloved Catholic nun who inspired and cared for so many during her life.  She passed away in 1997 at the age of 87 in India. She is known in the Catholic Church as the Saint Teresa of Calcutta.

I'm not done yet. I need to spend one final hour with Mother Teresa this morning.  I'll take a deep breath, pick up the brush and see where it takes me, all the while thinking of those people down in Parkland, Florida who are grieving the loss of 17 innocents.
Email Post