I won't get fooled again

A couple of night ago, I came in from the studio to find that a large box had arrived from MOO, the printing company that does my business and greeting cards.  I had placed a rather large order in anticipation of the busy year ahead.  Not only did I need a fresh supply, and selection, of business cards featuring my paintings, I needed greeting cards, as lot of people had expressed interest before Christmas.

I took a few pictures of the selection and posted them on my Russell Thomas Art Facebook page. Just over 24 hours later, all the animal and music icon sets had been spoken for.  My head is still spinning.  Who knew there would be that much demand?  Not me.  Packages of card sets have been dispatched to places like Red Deer, Calgary, Stettler, Fort Smith, Kamsack, Meadow Lake, and Scotland.  The way the printing numbers worked out, I have extras of the Slash, Tupac and Gord Downie cards, as well as the elephant and sea turtle.  I can create custom packs of these if anyone is interested.

All this administrivia kept me busy all morning yesterday, which kept me from doing any painting.  Jackie and Cindy, who had come in for a workshop the day before, were coming back for another afternoon of painting.  I had not had a moment to think about what I should paint.  My friend Glenn had dropped by to pick up his card sets, so I asked him.

"Who do you think I should paint this afternoon?"

"What about Robert Plant?" he suggested.  "He's be a great subject."

I did a Google search for images of the lead singer of Led Zeppelin, found one, and began the process of bringing him to life on a 30" x 30" canvas. 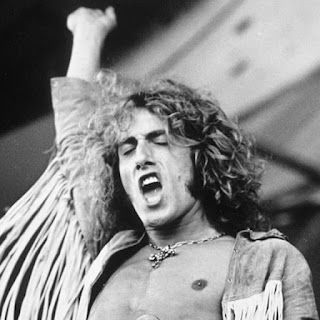 Jimmy Sheane, a local music phenom and fan, popped by as the painting was coming together to pick up a card set.  We had a lovely visit.  He had spent time in the studio playing music, back when it was Jim Dorie's man cave in the 1990s.  Just as he was leaving, he took one last look at the painting. 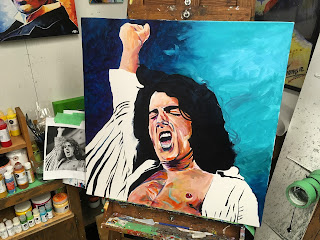 We both whipped out our phones and started checking.  Sure enough, he was absolutely right.  Both artists sported the same wild and crazy long hair and wore similar clothing.  They also looked equally intense while belting out their hits in concert.  However, my google search for "Robert Plant" churned up a picture of Daltrey instead.

Thank goodness that Jimmy was in the studio to set me straight.

I don't.  I could have easily titled this blog post "You know you're not a rock fan when...". 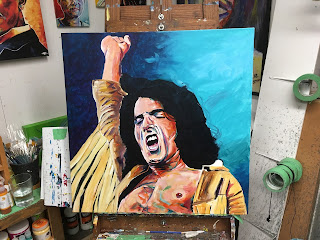 This happened to me once or twice before.  It's a little embarrassing,.  But who cares?  If you can't laugh at yourself, what's the point in living.

I took a break for dinner, then went back out to the studio to bring the portrait closer to its conclusion.  After a few finishing touches and adjustments this morning, it will be ready for someone's wall. If you're interested in owning this piece of rock 'n' roll history, send me a note.  You can connect with me via my Russell Thomas Art Facebook page or by email at russell.thomas@birdsongconnections.com. 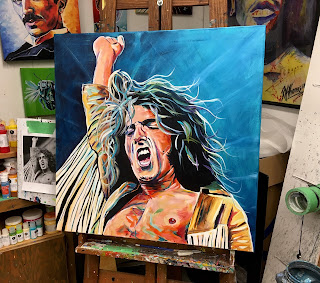 By the way,  because of the crazy demand for greeting cards, and to make sure we have a supply in stock for a number of big events coming up, we have a new, and larger, batch coming in within the week.  We'll be offering three different sets:  10 animals cards and 10 music icons for $30 each, or 5 raven cards for $15 each.
Email Post