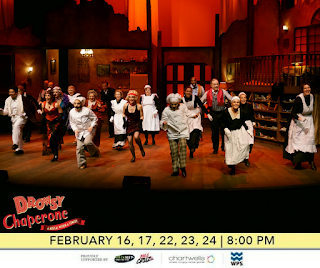 As I sat up in the second section at Keyano Theatre, attending a special donor celebration hosted by the United Way and featuring a performance of The Drowsy Chaperone, I kept thinking I was back on Broadway.  That Pavlovian connection between the greatest theatre district in the world and Keyano Theatre Company speaks volumes to to the caliber of performance we enjoyed last night.

The three things that jumped out to me were the voices, the choreography and the characterizations. 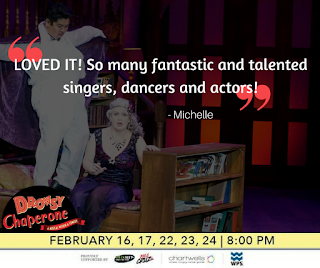 Every single one of the leads could sing.  Not just sing, they could belt it out, on pitch and with feeling, sometimes while executing a complicated dance number.  I have always known that Zenon Campbell is a standout actor, but I had no idea that he had singing chops.  And the voice of Dianne Pare....unbelievable.  Terry Mort, Dave Martin, Phil and the actress named Helen; first-rate performances all around (I would put everybody's names and characters but I don't have a playbill sitting in front of me).  And who will ever forget TJ Carabeo as Adolpho?  Whaaaaaaaat???  I was also taken by the two young actresses who nailed the two pastry chef/gangster characters. 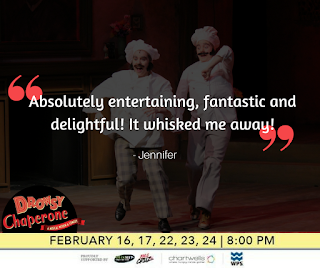 Jason Beck was perfect as the man in the chair, the musical theatre fan sitting around his record player and providing play-by-play of his favourite show of all time. 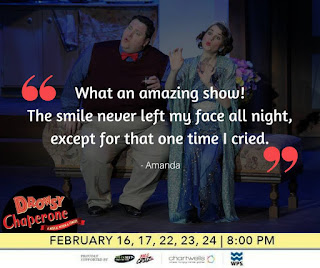 Their voice filled the crucible of Keyano Theatre in a magical way.  Kudos to Hilary, the musical director.  She knocked it out of the park with this one. 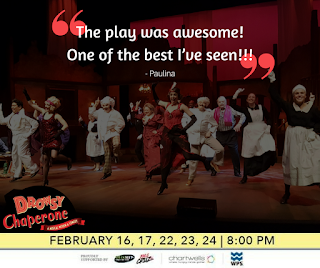 The return of co-choreographers, Darold Roles (also the director) and Ron Schuster - artistic leaders of Keyano Theatre when I first got involved over 20 years ago - is a wonderful thing.  The choreography of this show is pure fun.  You could be sitting in the theatre having had the most awful, stressful day, and the movement of these talented performers will make it all better.  It captured the sense of the period (1928) and elevated the story. 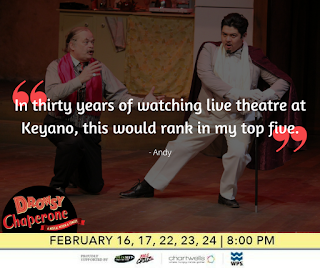 Norm who?  He's my neighbour, but I completely forgot that fact as he became the famous Broadway producer in The Drowsy Chaperone.  I get to see Brieanna McCutcheon in her role at Shaw TV almost every week, but there was not a hint of that person on the stage last night as she took the ditzy blonde up-and-coming starlet role and made it her own.

I could go on and on about the quality of this production, but one sentence kept repeating itself as I reflected on the show when we got home: