To the BOLD and back 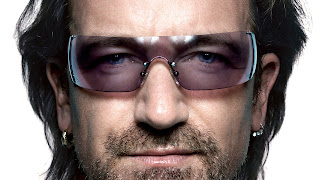 I've had an image of Bono sitting in the studio for the better part of three years now.  A potential client asked if I would consider doing an original portrait based on it, but then decided to cancel the request.  The picture never left.  It has been shuffled around, splattered upon and largely ignore for three orbits of the sun.

There is a time and a place for everything, and the time to dive into this patient pose of the lead singer of U2 arrived on Wednesday afternoon. 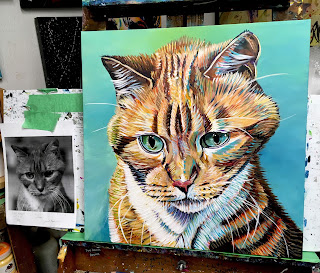 I had spent all day working on a portrait of a cat named Simon, my first commission from the state of Texas (Thanks Ellen and Jeff).  For some reason, painting portraits of cats requires a lot more effort and attention than doing the same for dogs.  I felt like I need a complete shift.  I went back and forth between a number of different subject ideas, but in the end Bono's familiar visage popped into my head.  It took me about 10 minutes to find the picture - the studio is pretty jam packed right now - before doing a quick sketch and beginning the painting process. 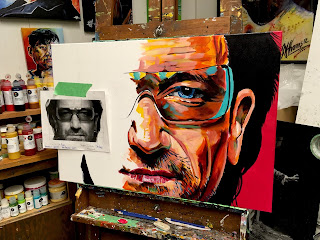 Without consciously thinking about it I took a completely new path with this portrait.  First of all, I started on the right side of the canvas.  I usually start on the left.  Secondly, I began by laying down all the bold rich colours then came back to skin tones.  The result was half a face by the end of Wednesday evening. 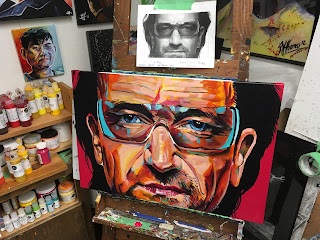 I continued the same path on Thursday morning doing the left side of the face: going BOLD and then back to some normal skin tones.

It was when I did Bono's striking blue eyes that the piece really popped. Adding some highlights and a white outline really helped as well. 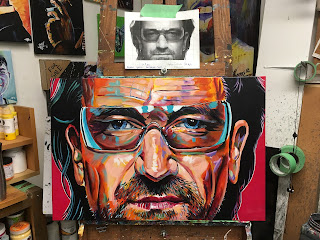 One of the challenges that some artists have is knowing when a piece is done.  I don't have that problem.  I knew in my gut that the portrait was done.  I took a photo then posted it on my Russell Thomas Art Facebook page.  It sold three minutes later.


An instant sell doesn't happen often, but when it does, it sure feels good.  The joy is less about the financial transaction and more about the fact the painting connected at a deeper level.  NOTHING feels better than knowing that something I created an immediate and powerful response.