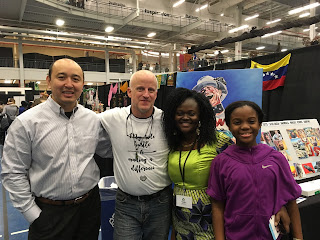 It isn't the 9 hours at the Multicultural Expo yesterday that has me exhausted this morning, it was the many trips back and forth to my car loading stuff in to, and out of, MacDonald Island.  If I do these kind of events on a more frequent basis I need to a) hire someone to help with the set-tup and tear-down, or b) invest in a dolly.  I was having flashbacks to the years I spent volunteering with the interPLAY Festival, setting up on Franklin Avenue back in the day. 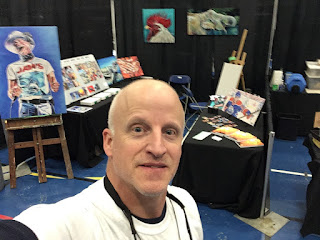 The heavy lifting aside, I was delighted to put paint to canvas as people started streaming in to Wood Buffalo's celebration of cultural diversity put on by my friends at the Multicultural Association of Wood Buffalo. 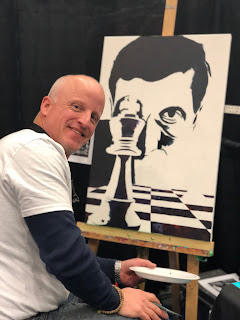 The Multicultural Expo featuring booths selling traditional foods and crafts with volunteers wearing traditional garb.  The stage, just a few booths to my left, had music and dance performances all day.  Thousands of visitors came and went, sampling the tasty goodies, enjoying the entertainment and watching me paint two very different pieces. 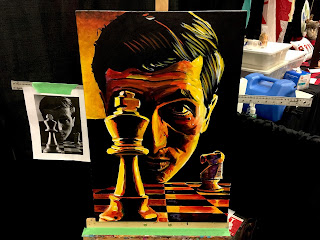 My first project was a portrait of Chess legend Bobby Fischer.  I was on the clock for this one as Harvey was going to drop by to pick it up at 3 pm to take to a big fundraiser happening that evening called "Jina Strong".  Jina is an ardent champion of the game of chess in our community and president of the local society.  She is fighting cancer and needs additional support to try some alternate therapies.  Her friends and colleagues from the Leadership Wood Buffalo program, of which I was a member, got together to do a GoFundMe campaign and organize this event.  I was honoured to be asked to donate a painting.  It felt fitting that it features one of the great champions of chess, as it was in support of a local champion of the game. 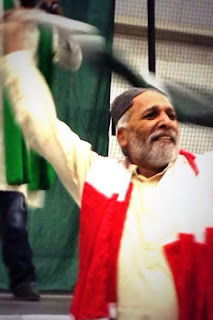 The second project was based on a photo that I had taken about 5 years ago of Zafir Iqbal, a resident original from Pakistan who was a champion of cultural diversity and inclusion.  In my mind, I had taken the photo at a Canada Day celebration.  However, when I eventually tracked down the picture buried in my files, it had actually been taken at the Pakistan Independence Day celebration that year. 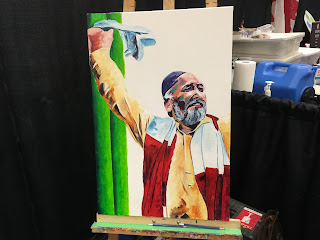 I decided to add some strips of green in the background as seen in the original photo.  Then I got stuck.  I didn't know where to go next.  It seemed the natural time to walk away for a few minutes.  Sitting in the washroom, looking at the photo I had just taken of the painting, I saw it: the solution.  I always thought the photo was taken during a bright clear sky morning at the Canada Day parade; I needed to make it so in the painting.  I got back to my easel, brought in the blue clear sky, and all of a sudden Zafir was majestically perched on the top of a float celebrating his appreciation and joy for being in Canada. 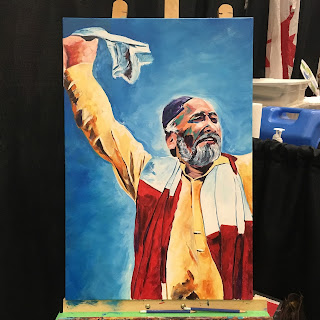 I loved being at the Multicultural Expo for many reasons.  The children streamed into my booth and picked their favourite business card, featuring many of my more popular paintings.  They gravitated toward the animal paintings and the one featuring Edmonton Oiler great Connor McDavid.  When asked to pick their favourite card of my animal, music icons and raven sets, they picked the sea turtle nine times out of ten.


The piece that most people commented on was the Thailand Damri (Elephant) hanging up on the back wall to my left.

"Ohhhh....I love the elephant," they would say, taking a few steps forward to get a closer look.

One lady couldn't take her eyes off the canvas print of the Connor McDavid portrait done during the Alzheimer's Face-Off in Edmonton last year.  I expect to hear from her in the coming days. 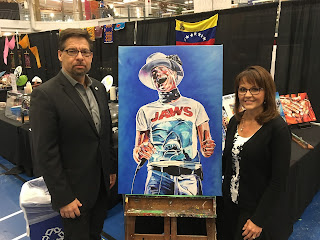 When I'm at these large public events, I often get to visit with our Member of Parliament, David Yurdiga and his wife Kathy.  After many years of these random visits, they feel like old friends.  David bought a set of cards that he intends to use to create a collage of my paintings to display in his office in Ottawa, along with the original portrait I did of his father.

It was also great to see Councillor Verna Murphy and her daughter.  Verna looks like a million bucks, having gone on an inspiring wellness journey. Her and her council colleagues seem to be jelling as a team and are tackling the challenges of the day with lots of energy and enthusiasm.

Events like the Multicultural Expo only happen thanks to the efforts of the dozens of people behind the scenes who put in hundreds of hours of planning.  Hats off to Justine, Rodas, and the entire team at the Multicultural Association of Wood Buffalo for an amazing day.  I was so pleased to be a part of it.
Email Post