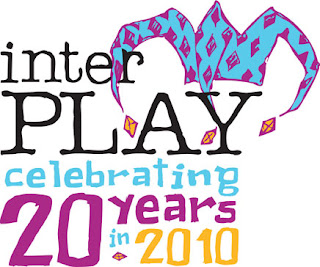 The festival began 21 years ago, in the summer of 1990. As interPLAY didn't happen in 1995, this summer marks the official 20th anniversary of the celebration of the visual and performing arts-I have been involved for 15 of those 20 years.
The set-up crew shut Franklin Avenue down at noon on Thursday and the massive site quickly took shape. Tents were erected, signs put up, tables and chair hauled in, and thousands of feet of electrical cable were laid out.
For the past many years, Friday of interPLAY has been a tough day for me. My stress level would always be through the roof, worried about the physical set-up, the amount of patrons on site, and the overall happiness of our performers. This was the first year that I felt none of that angst.
I spent the day attending plays (I'm one of the judges) and just taking it all in on the street. And also for the first time ever, I didn't have all the answers. Claude has successfully and completely taken over as the "man with the plan", the "decision maker", "Captain, my Captain!". And in this new state of interPLAY being, I've discovered that ignorance is bliss.
It felt great to start the day setting up chairs for the TransAlta mainstage viewing area. This simple yet important piece of business had been left uncompleted with no personnel available to get it done. So, I hefted chairs and put them into place, getting my hands dirty and working up a sweat. Going back as far as I can remember, I've always enjoyed the less glamourous tasks at interPLAY, picking up garbage, emptying garbage cans, putting up signs, arranging chairs. It felt good to be in my happy place to start interPLAY 20.
The afternoon was spectacular with lots of happy people, great performances and beautiful weather. But as the KAOS Creative Cafe wrapped up, the line of storm clouds lurking off in the western sky were beginning to make their move east. Just before 7 pm the sky opened up and Mother Nature unleashed her blessings on Fort McMurray, performing the most dramatic thunderstorm show in years. With no break in the system in view, the decision was made to shut everything down and cancel the evening's line-up of mainstage shows: Lau, The Nylons and Dustin Bentall.
While vendors, performers, patrons, staff and volunteers scurried about trying to escape the pummelling rain, a small impromptu performance of The Nylons began at their hotel. I wasn't there, but from what I understand the vibe was wonderful-a perfect response to a series of unfortunate natural events that attempted to dampen Day One of interPLAY 20 in 2010. 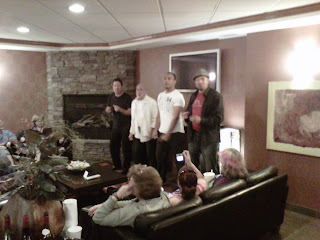