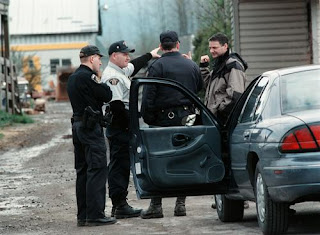 I was reading my latest copy of Vanity Fair, feet up on the coffee table, enjoying a lovely cool late summer breeze, when I noticed a police car parked out in front of Armit. A minivan was parked on an angle blocking the entrance to the crescent on the opposite side, so I was pretty sure it was just a typical traffic violation. Then I heard a distant knocking.

I looked out the window and saw two police officers hammering away at the front door of the house across the street.

Then I noticed one, two undercover officers, P-O-L-I-C-E in bright white letters across the back of their jackets. One, two officers in flack jackets brandishing automatic weapons. Then a few more appeared from behind the house followed by a special officer and a police dog. By now, I knew something interesting was about to happen.

"Heather!" I yelled to my wife enjoying a leisurely late afternoon soak in the tub.

She wrapped herself in a towel and dashed to the window. One of our neighbors, driving home with groceries, was pulled over in front of our house, unable to enter Armit Crescent, now completely locked down. She stood on the sidewalk for a number of minutes before coming into our house for safety.

An officer appeared with a battering ram to open the front door as they rushed the house. We heard screams of warnings as they swept the house and garage in a flurry of activity. It took ten or fifteen minutes, but eventually a young tattooed fellow was led outside in cuffs, followed shortly thereafter by a young lady in sweatpants. I would guess they were shocked out of their slumber.

We found out that the gang task force had received credible information that a drug house was in operation at this location. They launched an investigation and gathered enough evidence to execute a search warrant. The show of force was a result of the person of interest having registered weapons in the home.

All in all, it was a great piece of entertainment, as twisted as that sounds. It was like something right out of the movies.

There was a moment of levity as the police dog decided to take a nice long poo in the middle of the front yard. Anglia sagely asked on Facebook if "police officers get ticketed if they forget to scoop the poop!" As the poor dog had the runs, sadly, I don't think a baggy would have done much good. His handler had an embarrassed smile on his face, as we snickered off in the distance.
Email Post