Get off your couch 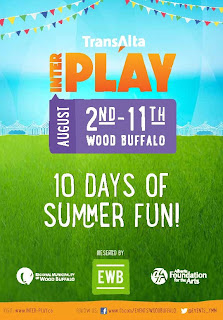 So many people who read this blog will finish their work day and settle into their overstuffed easy chair in their fully decked out multi-media room in the basement, turn on their favourite television show or movie, and quite possibly never experience a single moment of Fort McMurray's signature summer celebration, interPLAY.  Despite the fact that I am a self-identified raging optimist, I have enough festivals under my belt to know that the vast majority of our residents get sucked into the vortex of the boring and the benign offered up by the familiar, that they completely miss out on the fresh and unpredictable dished by this extraordinary celebration of the arts. 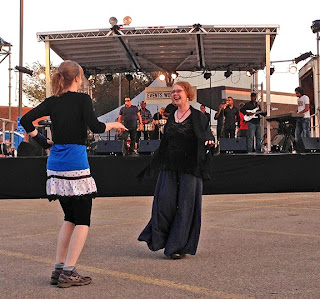 Heather and her friend Megan danced up a storm last night to a 15-piece smokin' hot band from Cuba called Havana d'Primera.  I sat on one of the benches watching until I eventually was inspired to get up and move my feet to the rhythm of the Latin beat too, though I would never claim to call it dancing.  We were the first to broach no man's land, that wide expanse between the MIX main stage and the TransAlta viewing tent.  Eventually, the large contingent of local Latinos gathered to the left joined in, creating a wonderful party under a clear Fort McMurray August sky in the parking lot in front of Keyano Theatre and Arts Centre. 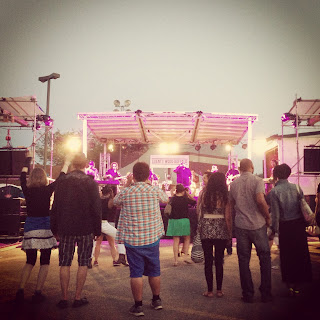 This is one of Cuba's foremost ensembles, and here they were playing their hearts out in a beautifully laid out festival site, an absolutely free performance under the stars.  It was stellar, sensational, unforgettable.  But, most of the people reading this probably were home watching reruns of Storage Wars, or something they had PVR'd from the night before.  I'm not judging; I'm just saying. 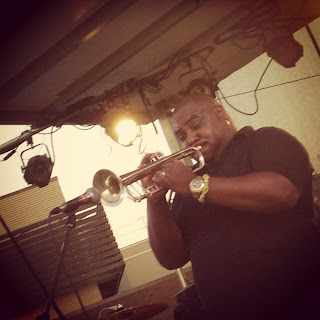 The scintillating performance of Havana d'Primera was merely a taste of what is to come in the next couple of days at the 23rd interPLAY. 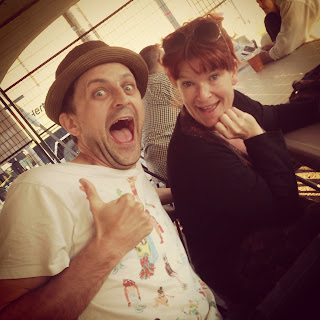 Heather and I, while enjoying the first refreshments served in the Wood Buffalo Brewing Co. beer garden, met two performers who have traveled here from New Zealand.  Matthew Harvey (Danger Man) and Penny Ashton (Promise and Promiscuity), have literally performed around the globe and you get a chance to experience them live and in-person in the unpredictable and fascinating space called "Live Theatre".

We exchanged pleasantries and shared some insights about our respective countries while sipping on our wobbly pops.  In total Fringe style, they then whipped out a couple of handbills for their shows.  After meeting these dynamic personalities and reading descriptions like "A fast-paced romp that entertains from the opening scene to the hilarious final bow" or "Jump onboard this steadily paced, tea-fuelled ride through a stand-up poetry world with no rules (excepting those of the Health and Safety Act 1992)", how could we not be intrigued to see them?

Nearing the end of the Havana d'Primera show, we walked over to get a snack.  If you've never had one of those Chipsticks - a spiral cut potato on a stick, then deep-fried and dusted with luscious flavourings - you are missing out a little slice of carb heaven.  We were scarfing down the last bite as Nolan Haukeness came over, just getting out of his technical rehearsal for The Order of the Black Cloaks.

Given these two choices: 30 minutes of yet another mindless television comedy versus a funny, smart, new play written by one of your favourite local morning radio personalities, isn't it clear it should be no choice at all.  The latter half-hour selection will bring you to an amazing festival, into a Fort McMurray-made story that is off-the-wall funny, fresh and memorable.  Oh, and when you're done, you can walk outside for a nightcap of a Chipstick and one of those raspberry flavoured beers they're serving up under the big white tent.

My rallying cry for the next three days is:  GET OFF YOUR COUCH!! Grab your family, your neighbours, your friends, your enemies, anyone you can think of, and bring them down to the interPLAY Festival at Keyano College and King Street.

Your list of entertainment options is....wait for it....LEGENDARY (another gratuitous couch potato reference)!  From letting your kids go bananas in the forest of inflatables in Doug MacRae Park to hanging out with them on a blanket with NightFlix, experiencing classic movies under the stars (something they will truly NEVER forget); from seeing almost 50 hopefuls performing their hearts out in the Homegrown Talent Search to witnessing the real-time Search for Cosette; from hysterical Fringe-style plays (Danger Man, Promise and Promiscuity, The Order of the Black Cloaks...to name but a few) to searing dramas (Morgue and Barefoot in Nightgown by Candlelight); from a teeming marketplace to terrific street performers - the TransAlta interPLAY Festival will make you look back at your couch and wonder why you didn't leave it long ago.
Email Post