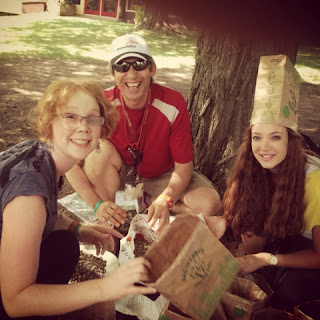 We have been at Mindcamp, Canada's creativity conference, for a couple of days now.  Set at YMCA Geneva Park northwest of Orillia along the shores of Lake Couchiching, the annual gathering (this is Year 11) of creativity people from around the globe has proven to be an outstanding family experience.

I had attended for the first time last year and fell in love with Mindcamp, the people, the program and the location.  Knowing my wife and sons, I got this overwhelming thought that they would love everything it had to offer.  I did my big pitch shortly after arriving home last year and our southern Ontario adventure was seeded. 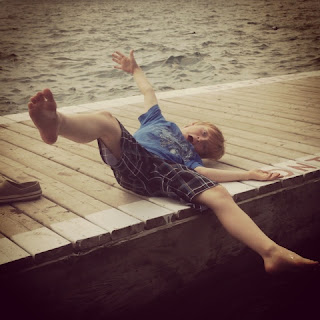 Ben, now 10, has been kept busy in the youth program, doing all kinds of things during the day under the watchful eye of a number of "Bananas", Mindcamp volunteers based out of "Bananistan".  Dylan, 14, is partly with the youth program, but mostly with the adults.  He has enjoyed attending workshops and visiting with these amazing people.  Heather and I, meanwhile, have been going from workshop to workshop, eating and resting when we need, and going for daily dips in the lake. 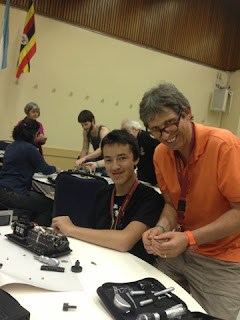 Dylan has been most amazing to watch, going up to complete strangers, many of whom are the creme de la creme of the global creativity community, and striking up conversations.

"The thing that has impressed me the most this weekend," said Mindcamper Jim Ridge - also the inspiration behind my recent adventures in mind-mapping and graphical facilitation - "is this young man.  He is amazing." 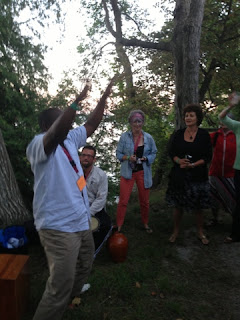 After dinner last night, we participated in something called a passeggiata - the practice of taking an evening stroll in Italian communities.  Along the prescribed path were fun activities and performances - buskers.  We started with a laughter yoga moment with Bruce, enjoyed a crazy group activity hosted by Beth where we had to count to 100 (going around the circle counting, but clapping instead of speaking on the even numbers - incredibly difficult and fun), watched a magician, sang a Cuban song with Mario and Toto, and delighted in some Karaoke hosted by Michel.

Dylan was walking on his own listening to music on his iPad and singing to himself when he bumped into Jim.

"Dylan, you can really sing," said Jim.  "You should try the karaoke."

"I could probably do that," said Dylan. 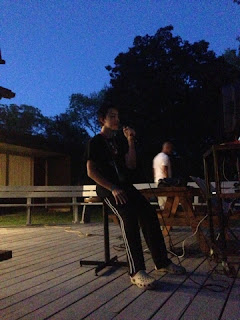 Jim walked him over to Michel, made introductions, and the next thing you know Dylan was singing a Seth MacFarlane song in front of an appreciative group of people.  As the song came to an end, applause was followed by cries of ENCORE, ENCORE, ENCORE.  He and Michel found another track for him to sing, sitting on a stool in the small stage in the dark, microphone in hand and he slammed through another vocal standard.

That was the very first time he sang in front of people other than us.

There is so much to say and share about Mindcamp, but in that moment when a young man shared his voice for the first time, being encouraged by strangers who have grown into friends, lies the essence of this annual gathering, the magic.