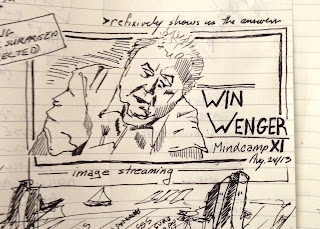 I felt like I was in the presence of a creativity God at Mindcamp XI, sitting at a long table with about 20 other people all paying rapt attention to Win Wenger, Ph.D. sitting at the head, voice amplified thanks to a lapel microphone and accompanying speaker. 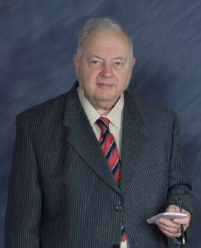 Win, 75, is one of the acknowledged luminaries of the creativity field.  Soft of voice, but sure of wisdom, he delivered his ImageStreaming presentation and proceeded to introduce us - many for our first time - to our subconscious mind.

He suggested that streams of images are playing in "the back of the mind", reflexively and constantly, as many as 10 to 15 at a time.  He asked the group of us to close our eyes and "tune in" by asking our minds What's currently going on that I need to be aware of? or What's next?

"Put your hand up if you've successfully locked onto something," he said.

Hands shot up around the room, including Heather's, sitting just across from me on the other side of the table.  My mind's eye was blank at that point, at least I thought it was.  In truth, an image did pop up, but I automatically edited myself and discounted it.  It took me a minute to realize that that was the image my brain needed me to explore.

We went on to explore two other images that were streaming in our minds while vocalizing what we were seeing, hearing, feeling, and smelling in detail to a partner.  Remarkably, trusting the process and the images that my mind was thrusting in my direction, it led me down the path to one word that continues to resonate loudly with me several days after I wrote it down: COMPLETION.

"Why are you here in the context of this, my experience?" suggested Win as a question to ask our faculties about the pictures and the suggestions it was dolling out.

Words like complete, finish and order continued to pulsate to the forefront of my subconscious - completion.

"Connecting consciously with this activity of the majority of the brain, brings more resources more immediately available for conscious use," write Win in one of the handouts he provided.

For me, completion is ripe with meaning and relevancy, a simple message from my brain but powerful in its potential to fundamentally alter and enhance my existence.

According to writer Richard Poe in an article about Image Streaming that appeared in The Pulse, its benefits can have a substantial impact on your Intelligence Quotient.

"In one study, physics students at Southwest State University in Marshall, Minn., experienced 20-point increases in their I.Q. scores, after only 25 hours of image streaming."

Creativity is largely about unlocking the power that lies within.  ImageStreaming is an amazing tool to help with that, described freely here and written about in Chuck Roman's CoreBook available here.

I passed up a quick draw session by Jim Ridge to attend Win Wenger's ImageStreaming, and with due respect to Jim, I'm so glad I did.  It was one of the personal revelation moments for me at Mindcamp XI and a session that I would absolutely recommend if you ever get the chance to take it.