The real GOLD of interPLAY 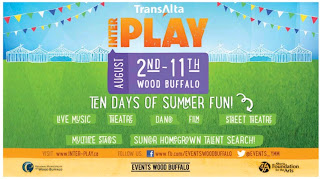 "I spent 12 hours at interPLAY," said Dylan as we drove home last night.  He had come with me at the beginning of the day and just stayed, seeing multiple shows, enjoying festival food and visiting with folks.  As I thought about things, it became clear to me that few events are structured in such a way, able to provide hours and hours of entertainment without any repetition.  I would suggest there is no other event with more total person hours of engagement.

At one moment over the weekend, there were 45 people watching a show in the recital theatre, 60 in the rehearsal hall, 35 in the art gallery and another bunch watching something in the main theatre.  Outside hundreds were gathered around the MIX main stage for the Abba tribute show, Arrival, while street performers had another circle of several hundred captivated on King Street.  Capturing an hourly snapshot of all the venues and activities would yield an incredible number, though a number impossible to reasonably estimate as the audience churn or turnover is so high.

Saturday provided a vivid reminder why interPLAY is so important to our community, and our future.  And while the highly attended attractions - street stunt shows, street performers and bouncy castles - are vital to creating the all-important festival vibe, providing fun, laughs, shock and awe, it is the moments of creative brilliance and self-realization that are the real gold of interPLAY. 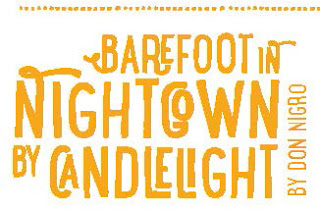 "Someone came up to me and shared that Misty's play is the best one they had ever seen at interPLAY," said David Whitelock, Executive Director of Events Wood Buffalo, the producer of the annual celebration of the arts.  Based on the comment, one can presume that the individual is a long-time patron with multiple festivals under their belt.  Barefoot in Nightgown by Candlelight, which won awards locally and at the provincial level, is one to see today on the final day of the 23rd interPLAY.  My wife and son will be taking it in at 1 pm in the recital theatre (Fringe Theatre).

What do you think this experience means to Misty and her talented cast?  What do you think it will mean to them to hear that someone put their creative efforts on the top of the pile in terms of quality of shows they have seen over many years?  What do you think it will mean to the good people of Windmill Theatre Players in High River when they get a cheque representing the proceeds of the show to help in their rebuilding efforts after the flood?  The ripple effect of what happens at interPLAY is a story worth telling. 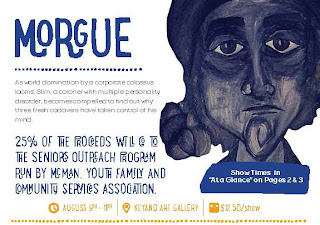 Nolan Haukeness, author and director of The Order of the Black Cloaks, a creative force who has plenty to be proud of after a great run of his play, came out of Morgue last night with a reaction that totally sums up why seeing this Francis Mennigke tour de force at 4 pm in the Art Gallery is an absolute must.

"That was the most amazing piece of theatre that I've ever seen," he said, with a look on his face that reflected profound admiration, amazement and gratitude as he walked down the Arts Centre hall.

I completely concur with his assessment.  There are only two other performances that compare, looking back over my 17 years of attending this festival.  His performance, along with that of Nathan Loitz, in Rubbish in 2011, and Alex Podulke's one-man show (DNA and the Dancing Fool) from 2010, are the only two that would come close to the artistic brilliance we witnessed last night with Morgue.  Francis's God given talent is impossible to describe - "There are no words," said someone after watching last night's sold out performance that ended with an instant standing ovation.  Your final chance to see this new work is at 4 pm today. 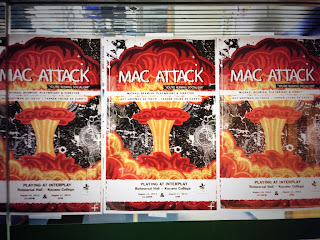 We ended the night by watching Michael Beamish's Fringe play Mac Attack.  Featuring the multi-talented Jeff Hoffman and Tanner Chubb, one of the cast members from the award winning production of Elephant's Graveyard, the play has an edge to it, and a chemistry between the two performers that was riveting.  It is a fascinating drama worth seeing today at 3 pm in the rehearsal hall (Cabaret).  It illustrates the range of Hoffman's acting chops, and exposes us to a fresh new talent coming out of high school and into Keyano, a talent with a world of potential.

My time has largely been spent behind the judges' table, offering feedback to over 30 contestants who participated in the Suncor Energy Homegrown Talent Search and 20 who came out for yesterday's Search for Cosette.

One parent stopped me in the hall last night saying what an amazing impact it had on her daughter when she was called back for round two of the Homegrown.  The external recognition of talent meant the world to that young lady, and the many others who faced their fears and put it all on the line in front of the microphone, panel of judges and audience.

I won't say much more about these contests, as I don't want to skew or distort the decisions we'll need to make later today.  The Search for Cosette finals are first on the MIX main stage, starting at 11:30 am, followed by the finals of the Suncor Energy Homegrown Talent Search at 2 pm.  Pull up a chair and cheer on some very talented locals as they vie for one of theatre's most coveted roles for young girls, and a total of $4,000 in prize money.
Email Post