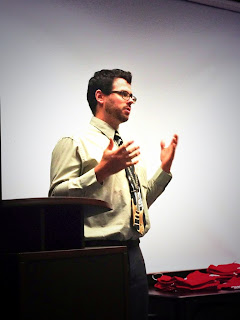 I'm so grateful to my friend Trevor at the United Way for drawing to my attention to the fact that I had been invited to attend the "Seeing is Believing" tour with the United Way of Fort McMurray.  While I mostly went on vacation in August, the emails continued to pour in, and the opportunity to participate in this agency tour was in the yet-to-be-discovered pile. I knew the campaign launch was coming up, as he had invited me to help out as a judge at their kick-off activities next week.  This tour, not directly connected to the actual campaign, was more about awareness and inspiring a deeper level of understanding of a few of the organizations (30+) that benefit from the over $7 million dollars that got raised during the 2012 campaign. 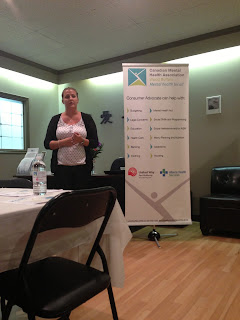 We started at the Canadian Mental Health Association of Wood Buffalo (CMHA of WB) located in the basement under Campbell's Music, a lovely set of offices and a meeting area that provides a safe and comfortable environment for their broad base of clients.  Their programs and services are a lifeline to so many, their staff visibly passionate about what they do and the vital role they play in the "social profit" sector.

In addition to providing support for people living with mental illness, the CMHA of WB promotes mental health to residents through workshop and program that deal with anger management, stress reduction, depression, suicide, parenting and conflict resolution, to name but a few.

Hopping on a little shuttle bus, the robust contingent of community leaders and media representatives traveled down Franklin Avenue to the Centre of Hope.

I have walked by this facility hundreds of times over the years, driven by it even more, going as far back as the days when it was Dr. Wong's office.  But, I had never been inside until yesterday, though I have both written about and participated in Centre of Hope events and awareness campaigns.

The Centre of Hope is a place for our homeless citizens to go, have a shower, do some laundry, pick up a new pair of socks, get housing and employment assistance, enjoy a hot cup of coffee or arrange a visit with a doctor.  It is a place to find a welcoming smile, a friend, a ray of hope in an otherwise overcast day. 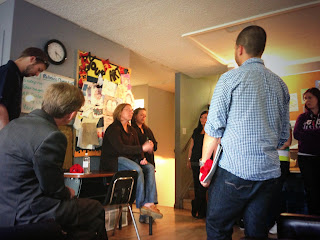 "What is the single most impactful improvement that has been made during your entire time with the Centre of Hope?" I asked the longest serving staff member.

"The clinic," she replied without hesitation.  "Absolutely the clinic."

Going up a small set of stairs in this split-level house turned into offices and eventually the Centre of Hope, you'll find a room with an examination table and medical supplies.  Homeless individuals can now see a nurse and get basic health care in surroundings that are familiar.

"Many of our clients don't feel comfortable walking into the hospital," said one staffer.

Space is always an issue at the Centre, the number of funded hours for the nurse is another, among many.  But they soldier on, doing outreach, working closely with other agencies to provide for this population that exists on the fringe, though in most cases, hoping to do otherwise.

The Fort McMurray Boys and Girls Club was our next stop on the "Seeing is Believing" tour, located on Reidel, across the street from Mark's and The Brick.  Serving youth stretching from one to 18 years, the facility contains several programming spaces, two gyms (one newer, one original to the building) and interesting nooks and crannies.

I was struck by the humour, sincerity and authenticity of Executive Director Howard Rensler.  He guided us through the facility and programs in a way that both illuminated the important work they are doing but in a way that made us feel comfortable and entertained.  It was great to see councillor candidate and President of the organization, Veronica Doleman, providing additional insights.  She is a bright young lady who, along with Howard and his staff, have done terrific work serving the young people of our community.

It was particularly nice hearing the excitement in Howard's voice as he shared with us some of the early discussions they've been having with our City Centre gang about the youth facility that will be included in Snye Park, adjacent to Prairie Loop Boulevard where it will intersect with Father Mercredi.

Back on the shuttle bus, we darted up the hill to Thickwood to visit the Stepping Stones Youth Home in Dickinsfield.  Run by Wood's Homes, this facility becomes a beacon of hope for young people who are homeless or near homeless, often dealing with issues related to families, addictions, crime and myriad other factors.

Walking in the front door, we discovered a comfortable common space with living room and kitchen.  Tucked away upstairs are several bedrooms, large enough to accommodate two people with a small level of privacy.  In the basement are five or six small curtain-partititioned sleeping spaces - perhaps 9' x 6' - along with washroom and laundry facilities.  Staffed 24-hours a day, the Stepping Stones Youth Home is often full to brim, with sofas being used to make sure that those in crisis have a roof over their head.

We were very impressed by the amazing Austin, a young man who is now living independently thanks to the care, attention and security offered by this facility.

"Where do you think you'd be today if Stepping Stones didn't exist?" I asked.

"That's a question that is too scary to even think about," he replied.

"I can't begin to describe how valuable this tour was," I said to Dianne Shannon, Executive Director of the United Way of Fort McMurray, as we began our return trip to the Redpoll Centre downtown.

In three and a half hours we were treated to great tours of four different agencies funded by the United Way that are positively affecting lives in our region every single day.  Each stop offered wonderful narratives that helped reinforce why it so important to support these organizations.  This tour was one of the most educational and valuable that I have ever experienced.  Over the course of one term on regional council, I wonder if it would be possible to hit all the vital agencies that generate social profit in Wood Buffalo with a tour format similar to this one?  It would be fun to try!
Email Post