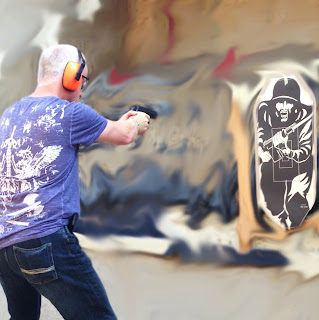 I grew up in the latter half of the cold war.  Tensions between the US and USSR were elevated (to say the least) up until my years in high school were coming to an end in the mid 1980's.  I worried a lot about global thermonuclear war (yes, I watched War Games more than once), conflict with the Russians, and violence in general.  Horror movies affected my sleep, and I had nightmares about armies (and Bigfoot) invading Saskatchewan (as absurd as that might sound).

In my teenage imagination, I even had a spot where I would go if we were given the ten minute warning that the bombs were on the way.  It was a small, pseudo bunker of sorts, a concrete-lined underground storage room at the back end of the junior high school gymnasium in Kamsack.  We stood outside its entrance earlier this summer when we were back home.  It felt a little ethereal.

My menu of fears flitted away as I grew older, had children of my own, and experienced life and all the good and bad things it had to offer.  The cold war dissipated, fears of World War Three went away, and threats of a completely different order stole the spotlight as planes few into the World Trade Center towers.

I flirted (very briefly) with the notion of facing my fears during my lost years - that time between thinking I knew what I wanted to do with my life and actually knowing what I wanted to do with my life - by joining the army and taking advantage of the free tuition offered by them if you agreed to serve a couple of years post-studies.  In Grade 12, I even went so far as to shave off all my hair, at a time when Duran Duran hair was the going style.

It never happened.  My course took a different route and my envisioned life in the military faded away.

So, yesterday, when I was offered the opportunity to go to a small weapons range and fire off a couple of rounds, I jumped at the chance.  I suspect I fired a bb gun and possibly even a .22 when I was young. There are fragments of memory of shooting at a tin can in a sandpit with my dad, but that's about it.  I've never been a hunter, and I'm most certainly not a gun person.  I don't think I've even held a pistol, let alone fired one.

I was given a brief set of instructions about how the gun worked - a Sig Sauer P229 - its component parts and safety procedures.

"Keep the gun pointed at the range target at all times," repeated the instructor several times.

I also learned that the proper hand position was very different than I imagined, and each time a new magazine was loaded, he had to remind me to correct my grip.

"Adjust your thumb position," he said.

With the recoil of the gun, having too a high a thumb position could have resulted in a lot of unnecessary pain.

I shot first from two metres and quite easily created a tight pattern around the centre of the target.  From 15 metres it was an entirely different story as only 4 out of 24 shots hit the desired area, 17 came close, and 3 were off the target completely.

It's not something I'd have a desire to try again, but for a brief few minutes I got a small taste of what our armed service men and women go through as they prepare for their chosen careers in the military, police or other protective services.  The difference is that I was doing target practice, they are preparing to be able to do it for real, to be in a life or death situation and have the instincts and know-how to do what needs to be done.  Most, thankfully, will go through their entire careers never having to fire their weapons in a real-world scenario.  But all have to prepare physically, mentally and emotionally to be ready to do do at a moment's notice.

As I was walking the range picking up my spent cartridges, I saw an actual slug that had been left behind, a small mass of lead that comprises the business end of the 9mm rounds that I had fired.  Holding that rough and heavy lug in my hand and thinking of the damage it could do to another human being really put into focus what we ask of the young men and women who serve.  Don't ever take for granted the service they provide and the weight of responsibility they carry every day they are on the job.
Email Post