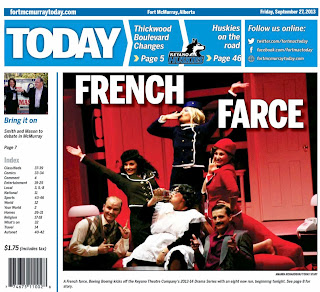 Curtis J. Phillips summed up his thoughts about Boeing Boeing, the first play in Keyano Theatre Company's TELUS 4-Play Drama Series, in one word: Wow!  Concurrent with that conclusion, I was seeing random comments on social media that suggested that we were going to be in for a fun ride.  What we experienced last night, compared to what I thought we were going to get, are comic immersions of a completely different order.

Boeing Boeing is BANANAS, among the funniest live theatre shows I have ever seen.  A French farce written by Marc Camoletti, it is the lurid tale of Bernard (played by Brodie Dransutivicius), who fluidly manages rotating dalliances with three stewardesses from three different airlines, with the assistance of his maid Berthe (played by Crystal Milburn).  This perfectly orchestrated arrangement, carefully timetabled and tested, begins to unravel when an old friend from America shows up and the weather changes the flight patterns, creating the perfect storm and a hilarious night of theatre.

The three ladies who play the stewardesses are equally brilliant, each finding the physical and vocal sweet spots.

Laura Conibear, a Keyano College VPA graduate originally from Stony Plain, played Gloria, the gun-toting American flight hostess.  Manic beyond measure, and the stereotypical red, white and blue bombshell that gets what she wants, when she wants it, and how she wants it, Gloria sizzles thanks to the skills of this young actress making her KTC debut.

I love the flexibility of Misty Oakes as an actress, and her ability to sink into the character so deeply that I completely lose sight of the person.  Playing Gabriella, the Italian stewardess, complete with an impressively curly and jet black wig, she is hysterically funny.  Going from sensual to steaming, Misty absorbs the archetype of the powerful Italian woman and blows it out of the water.  (For the record, I have a cousin who is married to a Gabriella.  It was nice to spend time with her at Keyano Theatre last night!)

Michelle Thorne gives what I feel is the performance of her career as Gretchen the German air hostess. Larger than life, she took over the stage every time she cycled in, and created this magical and very believable connection with Robert, Bernard's old friend from the States, played by Zenon Campbell.  I have seen Michelle do a lot of shows over the years, Dracula and Extremities among them, but her performance in Boeing Boeing topped them all.

Brodie first came into our world with Private Lives, a couple of seasons ago, emerging out of nowhere to play one of the romantic leads in that show.  He was brilliant then and he is brilliant now.  The set of acting chops he brings to the table works so well in this style  And while Brodie makes it look easy, it is anything but.

"Although simple in its plots, the challenges for actors working on a Farce are many," wrote Paul

Gélineau in his director's notes in the playbill.  "The timing issues and the type of physical humour these plays house are demanding.  The often bi-polar emotional reaction to situations and the technical attention to detail mean the actor requires a physical and mental flexibility unique to this theatre form."

As I watched Zenon Campbell enter as the quintessential straight man, arriving in Paris fresh off the boat (or plane) from Wisconsin, I felt like I was seeing the emergence of another Jack Lemmon or Tony Randall.  Understated, believable, and completely in the space of the play, Zenon is one of the most refreshing talents I have seen on the Keyano Theatre stage in years.  Slowly and incrementally he gets drawn into the web of complexity woven by Bernard and delivers a physical comedy performance that put me in mind of some of the classic Carol Burnett Show skits with guys like Tim Conway and Harvey Korman.

Crystal Milburn as the maid threaded everything together, established the conventions of the intricate timetable and the physical changes that needed to happen with the comings and goings of these air hostesses.  Punchy, precocious and perfectly-timed, Crystal once again proves herself as a force to be reckoned with when it comes to theatrical performance.  It was delightful to watch her get progressively more inebriated as everything unraveled in the second act.

I enjoyed Boeing Boeing immensely.  I equally enjoyed watching Heather laugh, along with former councillor Jim Carbery who was sitting to her left.  The reactions of the almost full house were priceless and illustrative of the impact of great live theatre.  If this show had buzz after its preview performance on Thursday, after two additional performances on Friday and Saturday, the buzz has certainly become bedlam.  Get your tickets now for remaining shows on Wednesday, Thursday, Friday and Saturday of next week.  They will quickly be in short supply.
Email Post