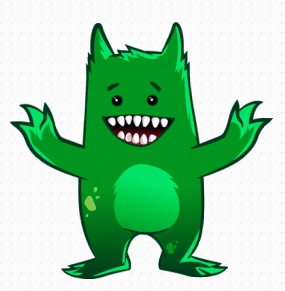 Ben was the first person to register for the Green Beast challenge at Sustainival, the world's first green carnival that occurred at MacDonald Island Park this Labour Day long weekend.  I had been volunteering behind the scenes with its marketing effort, and wanted to get a feel for the registration process and give Ben something interesting to do on the final weekend before the return to school.

We drove to MacDonald Island on Saturday morning, before the crazy rush of people began.  When we arrived, just before 10 am, things were relatively quiet and we were able to park very close.  By the end of the afternoon, cars would be lined up all the way to the end of the causeway near River Park Glen, something I had never seen before.

A few scattered teams were already buzzing about the site, what we called the "exhibition grounds" back in the old days.  Rides were just starting to warm-up and food vendors were preparing things for what was going to turn into a busy day at the midway.

We checked Ben in, got his Green Beast passport and set out together to find clues. 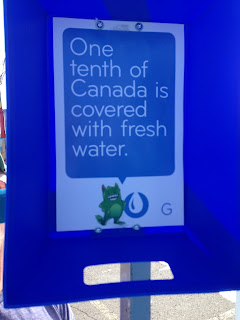 Here's how it worked.  Environmental facts (clues) were scattered throughout the 2-3 acre site, displayed inside plastic trays that were colour-coded and zip strapped in place, sometimes in plain sight, other times positioned in such a way that you had to ride the attraction to read it.  In some cases, the clues were so well hidden that we never did find them. 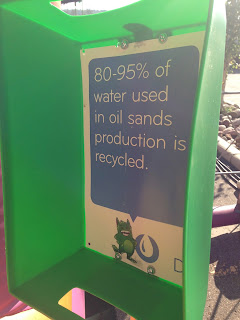 The environmental facts helped us solve a crossword puzzle that contained a certain number of key letters that formed a sentence.  Once we had that sentence solved, we had successfully completed the Green Beast challenge.  It took us about two hours from start to finish. 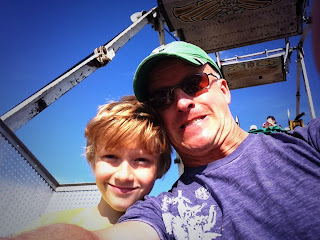 I was very pleased because I only had to tag along with Ben on a couple of rides.  That was just enough excitement to remind my stomach how much it hates being spun around.  We also enjoyed the team effort of going back and forth over the same territory trying to figure out what we missed the first time around.  It was great fun! 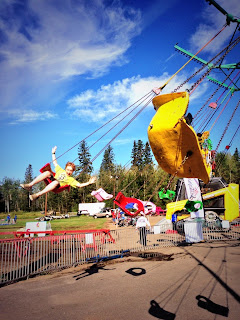 The activity reminded me of how much I hate golfing, but love looking for golf balls in the bush.  The Green Beast has the same effect for me.  Looking for clues and solving a puzzle, I was perfectly happy.  Ben, on the other hand, was able to ride the attractions he wanted, and participate in a cool activity with his Papa. 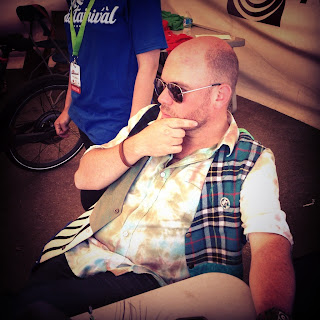 We came back later in the afternoon so he could collect his prize, a Woodchuck Longboard.  Joey Hundert, Antoine Palmer and their staff were giddy with success, but sun-soaked and exhausted after being pummelled with people throughout the day.

When all the registrations were counted, about 800 people ended up participating in the Green Beast challenge.

"We would have been happy with 300," said Joey Hundert, CEO of Sustainival.  "The response has been amazing."

He's right.  They have created something special.  I'll be back again next year, intent on finding all the hidden clues this time.

Meanwhile, the carnival rides themselves, powered by electricity generated using left over cooking oil,  attracted over 20,000 patrons over four days, 12,000 alone on the day we went.  It's a great sustainability story that deserves to be told, of using good old fashioned innovation to create good old fashioned fun.  Congratulations to the entire Sustainival team.
Email Post