Signs of the times

I was really dreading dealing with the signs that come along with a municipal election campaign. Part of my reticence might have been from ignorance as I wasn't around in 2010 when they were installed.  I had a hearty team of three - Mike, Kelly and Chad - who got them all up while I was in Edmonton dealing with a family matter.

Coming back from that trip, I remember seeing the first election sign, just as we came into town.  It was one of mine.  After a long drive and the guilt of having left that mammoth job to others, it felt great to see my ugly mug starring back at me. 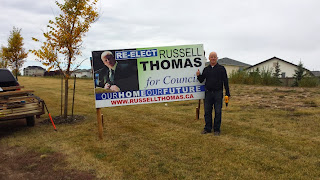 Dustin and I took the first load of signs up to Timberlea and Thickwood yesterday afternoon, before coming back to home-base downtown to grab the rest for the south end of town.  It took us 3.5 hours from start to finish.  I was physically exhausted and dripping in sweat by the time we were done.  Dustin, on the other hand, wasn't even breathing hard.  He is much younger than I.

It was great to see other teams out there putting up their signs.  We ran into council candidate Keith McGrath several times, putting up his bright and eye-catching Canada flag signs.  Tyran Ault's crew was on our tail most of the day, smiling and waving as they pulled up as we were pulling away from a number of different spots.  Veronica Doleman has a marvellous team of six out and about throughout the afternoon.  They were laughing and having a blast getting her well-designed signs up around town. 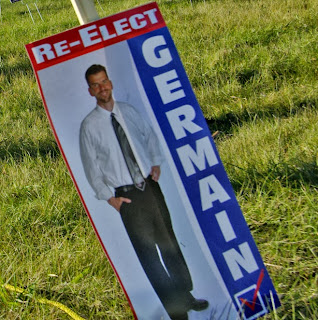 Sheldon Germain must have had an army of volunteers, because in a flash it seemed that his unique vertically oriented signs were everywhere.  It was remarkable how quickly they went up. 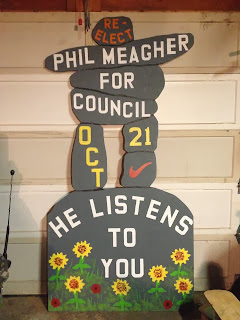 By the time I drove to the airport late last night to pick up Heather, I saw a number of Phil Meagher's handcrafted signs.  They are classics!  If there is ever a municipal governance hall of fame, his creations would need to be featured, especially his latest batch of inukshuk signs. 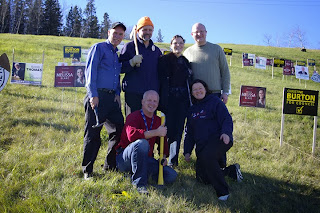 As we went from place to place, putting signs in place, followed by braces and stakes, I kept thinking of Dave Kirschner and wishing that his signs were going up too.  I have an image of him in my mind, working alongside all of us on the hill going up to Abasand, using our extra signs to create the giant V-O-T-E on Thanksgiving Monday in 2010.  I choose to hold on to that image, because it represents for me the integrity and commitment of the man.  And while he wasn't out with us yesterday slinging a hammer, I know he was watching and cheering us on! 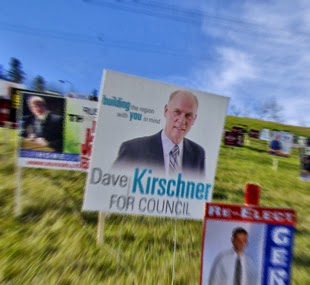