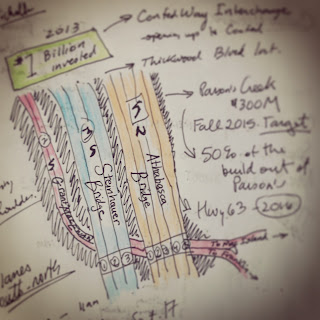 We are a city and region going through extraordinary growth pressures.  We have been living in a construction zone for so long that it would feel abnormal if we didn't see pylons and construction workers around every corner.  I get a small taste of it in the afternoon, as downtown traffic attempts to get on Highway 63 and across the bridge.  Coming home from Keyano College between 4 pm and 5:30 pm can take as long as 30 minutes. The drive is normally about 5 minutes.

I'm guessing for most of the folks who live in Thickwood, Timberlea and Parson's Creek, the slowdowns and delays have been somewhat incremental as everyone returned home from the summer, one school district began classes and then the other.  I had no idea how bad it was until the other morning.

A colleague at work shared with me that it was taking him two hours to get to work every single morning, no matter how early he set out.  This fellow rarely complains about anything, but he was frustrated, tired and baffled that nothing was being done to improve traffic flow. (Ironically, I checked in with him yesterday morning and he shared with me that he had hit the sweet spot, the perfect window.  He left his condo at 6:50 am and arrived in his office by 7:20 am)

Seeing an increasing number of tweets and Facebook posts - probably catching my attention now that I had become aware of the severity of the problem - it felt like the collective patience had run out and that people were ready to revolt.  I suggested trying some Twitter advocacy by tweeting Alberta Transportation with their morning commute times.  Here is just a random sample of comments:

@SarahMacDonaldH People cannot be expected to wait 2 hours to get 7 miles!!!!!

@rinajaylynn 2 to 3 hours in traffic in #ymm really sucks.

Serendipitously, the local top dog for Alberta Transportation, Landon Reppert, was the guest speaker at the Fort McMurray Chamber of Commerce Luncheon.  So, on the day when traffic frustrations seemed to have reached its apex, I was going to get the straight goods from the fellow in the know about what the hell was going on.

As suspected, the slow downs are all connected to the staging being done to get the bridges completed.  If this miraculous weather continues and everything goes according to plan, there is a possibility that the entire project could be done this fall.  As with any construction project of this nature, there are many variables that could knock things sideways, early snow and torrential rain among them, but Alberta Transportation is intent on trying to seal the deal before snowfall.

Fair warning: before we reach traffic nirvana, we have to suffer through purgatory for a few more days.  Phase 3 of the project is rather sketchy and confusing. Let's see if I can explain it.

Two lanes will go north on the Athabasca Bridge, as they have been for quite some time.  Traffic coming down from Thickwood will go across the bridge (one lane) on the Steinhauer Bridge and will not be able to turn on to Morrison or Hardin.  If you need to get to Franklin Avenue you'd need to use Hospital or King streets.  If you are coming down Confed, you will go south on the Athabasca Bridge (one lane) with the ability to turn at Morrison and Hardin.  Confused yet?

"How long will we be in Phase 3?" asked someone at the Chamber luncheon.

"It will be about two weeks," replied Landon Reppert.

"What happens if we don't make it to Phase 4 (project complete) before winter?" asked someone else. "Would we stay in Phase 3 until spring?"

Long story short, we need to hope for a glorious fall with very little precipitation and a late late arrival to winter.  Otherwise, we'll be in for a long, painfully slow, drive through winter.

After the bridges are done, all resources get focused on the Parson's Creek interchange with a Fall 2015 target to accept traffic.  That will pave the way for a 50 percent build-out of Parson's.

It was great to get answers and a glimpse of what lies in front of us over the next couple of years.  My only encouragement for Alberta Transportation, working closely with the Regional Municipality of Wood Buffalo, is to continue working together to see what can be done in the middle of this construction chaos to improve commute times.  Loss of productivity, personal time, and patience is off the charts.  We must never give up trying to innovate and be better.
Email Post