In praise of Mr. Sexsmith

There is a scene near the end of the movie Unfinished Song, when curmudgeonly Arthur, played by Terence Stamp, sings a song called "Lullaby" in front of a captivated theatre full of people.  From the deep recesses of his heart through his voice, we get swept away with by his intense, authentic and immersive love for his recently deceased wife, played by Vanessa Redgrave.  All the things the character couldn't speak, he sang, beautifully, simply.

Goodnight my angel, now it's time to sleep
And still so many things I want to say
Remember all the songs you sang for me
When we went sailing on an emerald bay
And like a boat out on the ocean
I'm walking you to sleep
The waters dark and deep
Inside this ancient heart
You'll always be a part of me

I'm very excited about Ron Sexsmith coming to town because he sings the song that reaches deep into my heart and pulls out the intense, authentic and immersive love I feel for my wife.  If I had the talent to play the piano and sing at the same time, this would be the song I would serenade her with, no question.  It's called "Tomorrow in Her Eyes".  This is a live version from Paris with Ron playing guitar....it's gorgeous.

I saw Ron at the Meyer Horowitz Theatre in Edmonton a couple of years ago.  He was outstanding, one of the most innovative and intoxicating singer-songwriters I have ever seen.  If you watch his Twitter posts, you would also agree that he has a killer sense of humour, a quirky, creative and entrancing personality.

There is a reason why some of the most acclaimed musical icons of our day are fans of Ron Sexsmith. If Paul McCartney was sitting here, he'd implore, compel, absolutely insist, that you come out on October 11th to bask in the glow of this one-of-a-kind artist.  Steve Earle would say the same thing, though probably tossing a few affirmative expletives in for good measure.  Elvis Costello would express something totally mind-blowing and brilliant. 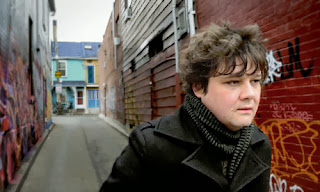 I will say this, with total conviction and belief:  This is the one concert of the year that is an absolute can't miss.  If you love music.  If you are prepared to see a true songwriting genius, the likes of which comes around once in a generation. This is it.

I've got my two tickets. One for me and one for my beautiful wife Heather.

Ron: if you can find it in your hear to do "Tomorrow in Her Eyes", that would be pretty cool, not to mention downright romantic.
Email Post