Letting in the Elephant 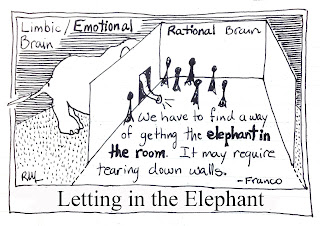 One of the great unknowns for me, accepting the interim executive director position with Arts Council Wood Buffalo, was what effect, if any, it would have on my long-term ability to stay on regional council.  As I am on a secondment from Keyano College until May 31, 2014, I knew that I was safe initially.  But, what would happen post-secondment, should I be so fortunate as to be re-elected, was still very much in doubt for me.

If I ran into people earlier in the spring or in the summer who asked about whether or not I was going to run, my answer was likely that I didn't know, because I really didn't. So, a concern and an opinion from a citizen on Facebook about conflict, shortly after my formal announcement last night, is valid and worth talking about immediately so we can move on to talk about other important issues that are before us in this campaign.

After seeking and getting a legal opinion, it was determined that as I am working for a separate and distinct entity known as Arts Council Wood Buffalo, and as such entity is governed by a board of directors that will determine how it spends any monies it receives from the RMWB, I am not in a conflict position that would force me to resign from council.

And no different than having had to recuse myself for matters dealing with my employer, or matters that would have a direct financial impact on me or my employer, I will be recusing myself when matters regarding Arts Council Wood Buffalo come before council.  In the three years of sitting on council, there was maybe a handful of occasions when I had to leave the room and not participate in debate or discussion regarding matters dealing with Keyano College.  I imagine that it would be similar going forward, if I get enough votes on October 21st.

As part-time elected officials working as lawyers, business owners, teachers, administrators and private citizens, there will always be matters that land on the agenda with which you may have a pecuniary interest (see Division 6 - Pecuniary Interest of Councillors, Municipal Government Act, Revised Statutes of Alberta 2000).  What I have observed is that most elected official err on the side of caution when there is even a glimmer of possibility that a pecuniary interest exists.

To be honest, if there had been any doubt from legal counsel on my ability to serve, especially post-secondment in 2014, last night's announcement would not have occurred and my name would not appear on the list of councillors for Ward One that will be revealed on September 23rd.  I took this matter very seriously and was completely satisfied with the opinion and the rationale.

Like I said to one of the reporters last night, the choice to put my name on the ballot in 2010 was all about taking the next step in my community leadership journey.  It's been an amazing adventure and education.  I've had the benefit of learning from tremendous mentors with long years of service and wisdom about serving on council - Phil Meagher, Sheldon Germain, and Mayor Blake among them - and many hours of listening to governance guru George Cuff.  The learning never stops, nor will it ever.

Wrapping my brain around whether I could legally run was another lesson learned.  I'm certain there are many more to come.  Thanks to the citizen for raising the concern right away so I could let the elephant in the room, instead of letting it wander about recklessly outside.
Email Post