There is a lot to be said for following your instincts.  Yesterday turned out to be a beautiful day, sunny and warm, with only a few wisps of clouds in the sky.  It was perfect for the RCMP's Freedom of the City parade, a tradition that goes back over three centuries whereby the detachment asks for permission to enter inside the walls of the town.  The ceremony was pretty amazing, with the Lieutenant Governor of Alberta, Donald Ethell, present along with the Deputy Commissioner of "K" Division, Dale McGowan and many other dignitaries. 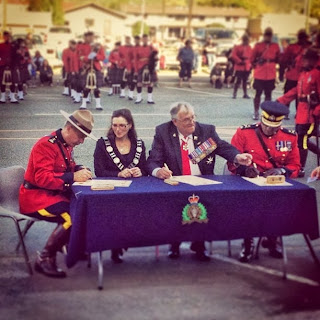 I think the most impressive moment was when the members did their march past salute as the RCMP helicopter flew overhead.  Seeing the dust get whipped up, swirling around the iconic red serges marching in formation, was powerful.  I'm glad and honoured that I was there, but with the days getting shorter, I knew I needed to get home to finish preparing my election signs.

It was a couple of weeks ago, when I first pulled them out of their storage spot and began the process of getting them ready.  Thankfully, a quick visit to our returning officer a couple of days later tipped me off that I needed to trim a foot and a half off my sign legs in order to be in compliance with the new election sign bylaw that we passed.  Signs on municipal lands can be no more than 2.0 metres from grade to the highest point of the structure.  For those following along on the old system of measurement, that is just over 6.5 feet. 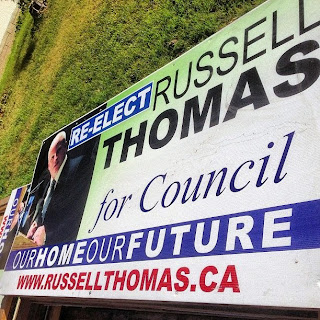 As I was trimming the legs, I took the opportunity to affix the RE-ELECT decals that I had made at Printing Unlimited. I have made the choice to spend all my election dollars with local vendors.  Shopping local has always been super important to me. While my small lawn signs seem to be in pretty good shape, the larger 4' x 8' signs are quickly reaching the end of their life.  After this election, they will be taken out to the landfill for recycling.  The wood has also seen better days, which means that much of it will be cut down for firewood. 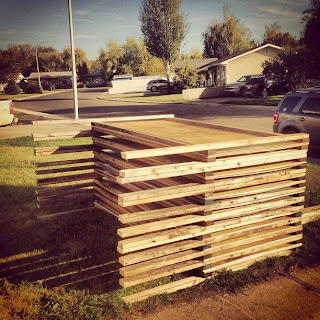 Today my friend Dustin is going to come over and work on lawn signs,  As they were originally printed in the wrong direction, we need to attach them to survey stakes so they can be displayed.  The new bylaw has eliminated the use of the smaller signs on municipal lands, which means that they only place they can go is on private property.  I think that's a great thing because it was the lawn signs placed in public spots that caused the most grief in 2010.  Whether it was wind or vandals, they had to be repaired constantly.  It was a real drag on our time.

With enough graphic design skill picked up over many years of being the publicist at Keyano Theatre, I've been able to save a little bit of money by doing my own design work.  I did three versions of an ad for the October edition of SNAP before landing on the one that I think works best. 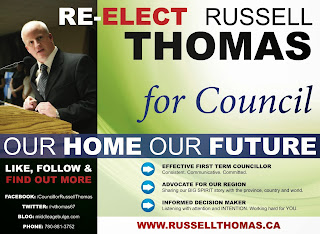 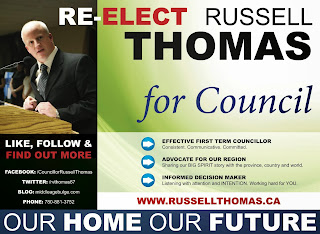 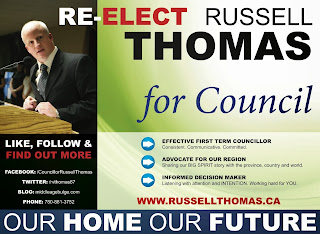 It's an interesting process.  Even looking at it this morning with fresh eyes, I can see something else that I could adjust to make it stronger.

Built with content management systems, websites are easier than ever to update.  I spent an hour or so making a few changes and adding a DONATE button.  It's now easier than ever to make a campaign contribution going through PayPal.  Brad Etson is my official agent, so his name will appear on the note you get back from the good folks at PayPal.  I know this because I tried it out yesterday, making a small personal donation to the campaign to see what would happen. 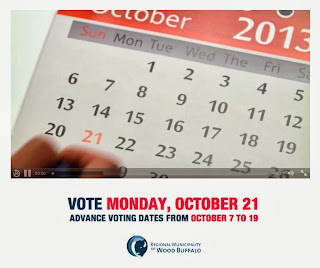 Every single candidate is doing similar things as we approach nomination day tomorrow.  Some have teams of people helping out, others are doing the lion's share on their own, all are integral to ensuring we inspire citizens to take ownership of their "space" on the ballot.  It's a powerful piece of real estate that can and will change our community when the final count gets revealed on the evening of October 21st.
Email Post