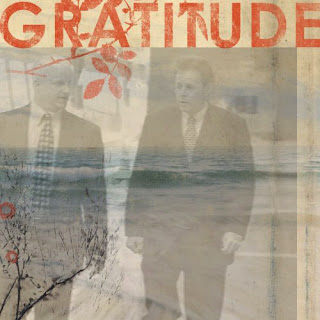 Over my career and life, I have had moments when people had expressed written appreciation for something I had done.  I have kept all of those little hand-scribed notes, cards, memos and letters.  They are buried in several memory boxes that are tucked away under my desk and in various spots on dark shelves in the basement.  Among them would be a short note from Mr. Waters from the CHUM head office congratulating me for a successful "book" (ratings results) when I was program director at Q91 in Drumheller.  There are myriad Christmas cards with heartfelt messages that I just can't throw away.  And there are many example of handwritten notes that landed at just the right time, when I needed the encouragement or acknowledgement for something of significance that had happened.

If you were following the local political events of last week, you will have noticed some election rhetoric between councillor candidate Guy Boutilier and myself.  I took exception to some things he said in announcing his candidacy, he responded through the media, and we moved on.

In both my blog and in my comments to the media, I had mentioned his long years of public service - he was first elected to the City of Fort McMurray council in 1986 - and the breadth of knowledge and experience he could bring to the group that will be elected on October 21st, but I didn't mention the most important thing Guy taught me as an elected official - the power of gratitude.

From the time when he was first elected to the time he left the legislature, he took the time to catch people doing things right and sent them personalized notes or effusive messages on government letterhead.  If it was a formal letter, possibly drafted by a staffer, he would always (always!) cross out the formal greeting and handwrite the person's name and add a short personalized note.

I heard from him less and less as he got swept away in the dynamic and all-encompassing world of provincial governance, but during his first few years as MLA and in his first few ministerial positions, I glanced through my mail on more than one occasion to find an official government envelope.

I'm not sure if he realized the impact to those of us who received this very personal attention and acknowledgement?  But if I was to dig through my boxes I would likely find notes or letters from Guy from when my son Dylan was born, when I finished up a successful play, or when I graduated from Leadership Wood Buffalo.  Those are ones that stand out in my mind, though there very likely could be others.

As political leaders, we have to stand up for things, which is what both Guy and I were doing last week.  But even in the eye of the storm, I kept thinking of the kindness this man showed me and my family over the years.

Robin Sharma said that "It's the little things done consistently that make the biggest difference."

Guy: those little messages of congratulations, encouragement and thanks made a huge difference.  They were appreciated and they were kept.  Thank you.
Email Post