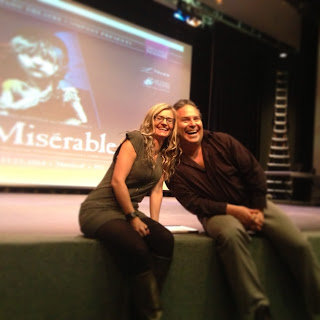 "I've been waking up every morning with a song from Les Mis going through my head," I said to Ben the other morning.

"What song was it this morning?" he asked.

"One more day to the Les Mis auditions."

That was on Thursday morning. The first phase of the "auditions" was last night, an info session and a chance to sing together as a group.

I put the word "auditions" in quotations because Keyano Theatre Company (KTC) is doing something completely different with respect to casting this show and getting people involved.  They are trying to change the language and the experience of trying out for productions.  Judging from the turnout last night, I would suggest that they are on the right track.

Director Claude Giroux introduced the process to the 40 to 50 people who came out for this second round (the first round was in August, also attended by 40 to 50 people), talking about the various types of roles, on- and off-stage.  As I craned my neck looking around the Keyano Recital Theatre, I recognized less than half of the hopefuls, a stunning change from more recent audition experiences when most of the faces were quite familiar.

It was particularly exciting to see new male faces in the crowd.  There has been an imbalance between women and men for as long as I can remember, and we've always struggled getting enough guys out to cover the male parts in larger productions. There were 6 or 7 men that were complete strangers to me at the info session, which makes me incredibly optimistic that something has changed.

Dylan and Ben both came out last night and joined the rest of the attendees on stage to sing "Do You Hear  the People Sing?" with the help of musical director Susan Lexa.

You'd have to ask Claude Giroux, Alan Roberts and several others who were sitting in the house, but after several runs through the first part of the song and a few directions from Susan, I'm guessing the hairs were standing up on the backs of their necks.  It sounded amazing and felt even better.

"This is some of the greatest music ever made," said Claude Giroux earlier in the evening.  I think he was right.

The three Thomas boys sang together at the top of our lungs on the drive home, Ben keeping Dylan and I on track as he has already learned the words to most of the songs in the musical.  As a father, I can promise you that singing full voice, with my sons doing the same, driving down Franklin Avenue was an amazing moment that I'll never forget.

Do you hear the people sing?
Singing a song of angry men?
It is the music of a people
Who will not be slaves again!
When the beating of your heart
Echoes the beating of the drums
There is a life about to start
When tomorrow comes!

With the last phase of the casting process happening when tomorrow comes, the Les Mis journey is about to start.  For the 200 or so people who will be involved as actors, musicians, stagehands, seamstresses, ushers, spotlight operators, and myriad other roles, it will be a joyous ride ending in likely what will be the most-attended production in KTC's history. 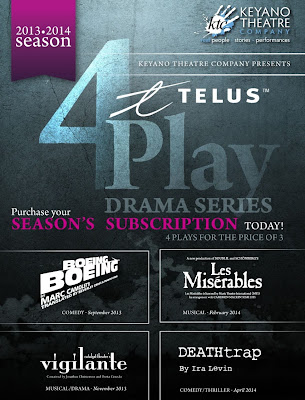 Your best bet when it comes to tickets is to purchase a season subscription.  On the strength of Les Mis and a solid supporting line-up of show - Boeing Boeing, Vigilante and Deathtrap - subscription sales have spiked considerably.