Bound and determined to go to Afghanistan 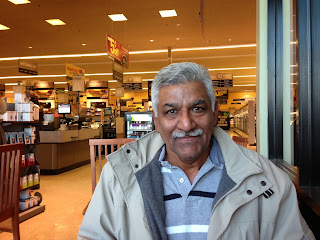 Mohammad Dogar, a local businessman and new Canadian, is at that point in his life where he is focused on service to his community. A veteran of the Pakistan Army - he served over 20 years, finishing his career as a Major in the infantry - he is on a quest to go to Afghanistan.

"As a person who spent many years in the armed services, I know how important it is to show appreciation to our men and women in uniform," he said.

"My goal is to travel to Afghanistan, hopefully with the permission of the Canadian Embassy, and bring greetings and appreciation from the citizens of Fort McMurray."

Intent on making a pilgrimage to this embattled nation where Canadian peacekeepers have been stationed for over a decade, Dogar is looking to fund the trip on his own. All he is looking for from the federal government is permission to travel in hopes of expressing our appreciation to the troops through a personal visit with the senior officer in charge.

"I think it sends a very positive statement as both a former military man and a proud new Canadian," said Dogar.

Going through the hoops of getting approval to travel to Afghanistan is not an easy task. But Mohammad is determined to make it happen, as his way of showing support for our troops.

"This country has provided new Canadians so much," said Dogar. "It has given much to my own children, who have now begun to raise their own families here in Canada. This is my way of giving back."
Email Post