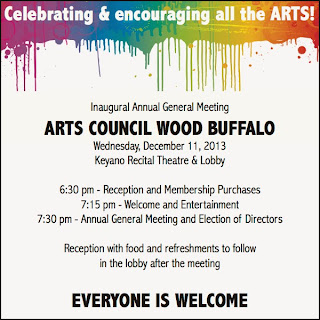 Tomorrow night, the inaugural Annual General Meeting of Arts Council Wood Buffalo will take place in the Recital Theatre at Keyano College.  We'll be set up in the lobby selling memberships for those folks who would like to be able to vote and receive the associated benefits started at 6:30 pm.  It'll also be a chance to mix and mingle with a very broad cross-section of artists and people keenly interested in what the arts bring to our community and region.

At 7:15 pm, we will be ushering everyone into the theatre for a 15-minute entertainment showcase that has been prepared to kick-off the Arts Council AGM with energy, enthusiasm and loads of talent.  The content of the showcase is a closely guarded secret, but will be one hundred percent local.

Shortly after 7:30 pm, we will dive right into the proceedings with the business we need to accomplish including the election of directors.  A reception will follow with light refreshments and networking in the lobby.

The importance of an Annual General Meeting cannot be overstated, especially as an organization like Arts Council Wood Buffalo sets out to build membership, credibility and trust in the region.  Response to our call for people interested in becoming board members has been wonderful.  At this point, we have 15 people who have indicated that they will let their names stand for 11 director positions.  We will also be accepting nominations from the floor.  As a representative board, people who can stand in multiple constituencies have been asked to pick the two they feel they most strongly represent. If they don't get elected in one, they can run in the other. There is no question that we'll be voting by silent ballot in several of the constituencies that include theatre, music, literary arts, dance, video/film/photography, visual art, community, business/industry/non-profit, First Nation and Métis.

You can significantly impact the momentum of an organization by your presence and the energy that you bring into an AGM.  In 1997, the Fort McMurray interPLAY Society was at a significant juncture in its history.  We had successfully brought the festival back to life after it took a year's pause in 1995.  It was time to refocus and rebuild public trust and support to bring it back to its original home on Franklin Avenue in front of Jubilee Centre.  Arts supporters and enthusiasts came out in droves that night and propelled us forward into a tremendous period of growth and maturation as an organization.

An Annual General Meeting can and should be a time when the membership and stakeholders gather to celebrate, reflect and ensure the organization is on the right path.  It is a time to reconnect with old friends and make some new ones. Most importantly, it is an opportunity to reinforce the importance of the purpose of the organization and demonstrate the community's support.  Long story short, AGMs matter, which is why we are so grateful to have had such an overwhelming response to tomorrow's gathering.

We hope you will join us for the meeting and consider becoming a member of Arts Council Wood Buffalo.  The cost for membership is $10 for individuals, $25 for social profit organizations and $50 for business and industry organizations.  There is strength in numbers, and we need your participation and enthusiasm to move forward with the work of supporting and promoting arts activity, development and exploration in Wood Buffalo.
Email Post