Have you ever been at a party where you're having such a great time that you don't even notice most of the people who are there and all of a sudden it's over?  That's what happened for me last night at the Let's Get Sketchy event at Keyano Theatre, though for entirely different reasons.  There were no spirits of the liquid variety involved in Let's Get Sketchy!

I started drawing as soon as things were set-up, sketching Dave Martin who was playing guitar in the lobby.  As soon as the models arrived - Zachary, Alexandra and Jennifer - it was like someone pressed the big green GO button on the assembly line as sketchers, painters and poets ascended into the creative zone, an industrious hush descended for the next 45 minutes, save for Dave's guitar and Dylan's voice, as he was singing along to his Seth MacFarlane music on his iPad. 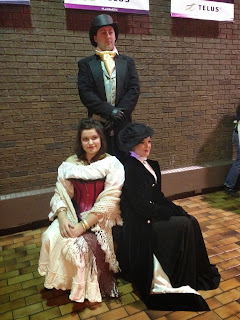 Our three models, dressed in period garb from the 1800's, posed together for the first sitting.  I was using a black OptiFlow pen, Ben was working in pencil, others were using charcoal, some had canvases, and Michelle was carving in clay.  Several writers were invoking words inspired by the tableau. It was a fascinating melange of mediums and disciplines. Each sitting was scheduled for 15 minutes, much longer than the five we had given ourselves as a family when we tried it out or the first time a couple of weeks ago.  I thought I had oodles of time.

"You have three more minutes," declared Steph Link, founder of Brazen Elephant Productions who had arranged the models for the event.

"What???" I screeched, realizing that I had a lot of finishing to do in the very little time we had left.

I decided to honour the 15 minute blocks, signing the piece, and moving on to the next pose.  The actors moved to a new location and a different position.  We moved around with them.  They were amazing, staying completely still for the full 15 minutes, giving us the opportunity to catch as much detail as the time allowed. 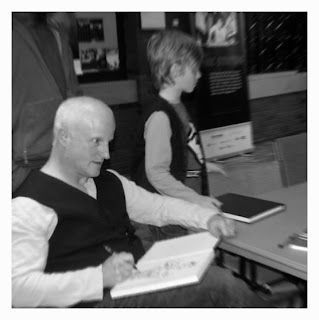 While all of this was happening, patrons began arriving for VIGILANTE, observing the creativity that was happening in the lobby and down in the gallery.  At several points, I felt people hanging over my shoulders watching.  In my mind, that was one of the key objectives of Let's Get Sketchy: to expose the creative process to the public.

One of the creative minds behind the event was Reinalie Jorolan with Boreal Artist Institute. She reflected on a question that I had asked during one of the planning meetings as to what success would look like, and identified three that were definitely achieved: great teamwork and appreciative people, boundless artistic possibilities, and generous supporters wanting us to do the event again.  A bonus winning moment for Reinalie was her extemporaneous poetry collaboration with Ben. 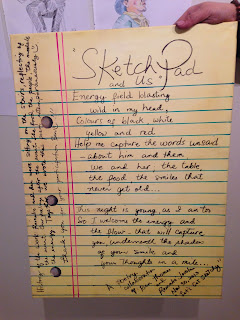 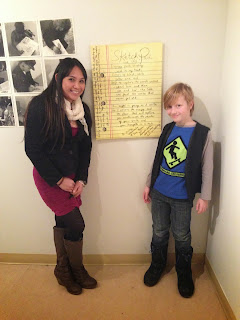 Sonia Burke-Smith, the other visionary behind Let's Get Sketchy was thrilled with event. 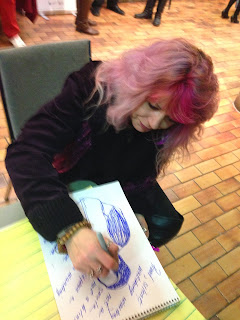 "Thank you for all your smiles tonight," she wrote on Facebook.  "This chick's spirits are soaring…"

As our time was coming to an end and VIGILANTE was about to hit the stage, I glanced up from my final drawing to see that an exhibition has already begun to take form.  Organically hung by the approximate 25 participants, it was remarkable to see something so rich and beautiful emerge from nothing, to something  extraordinary, in a short hour and a half.

Here are just a few examples of what you'll find when you visit the Let's Get Sketchy exhibit. 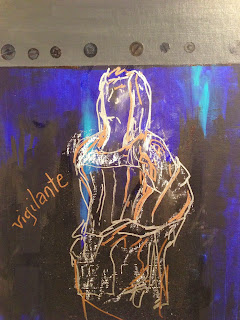 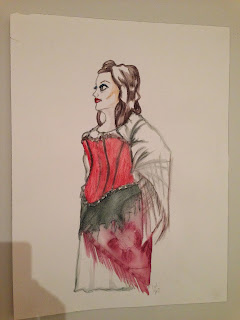 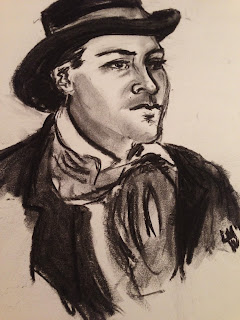 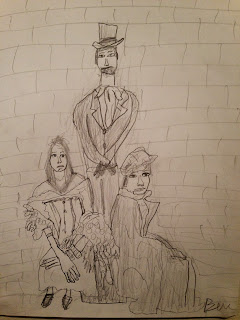 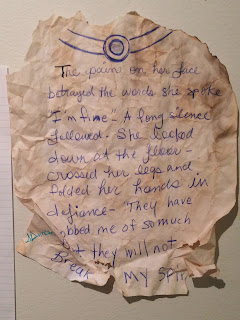 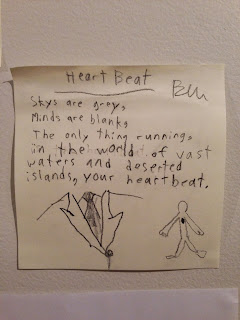 Many thanks to Keyano Theatre and Arts Centre for supporting this collaborative and creative #YMMARTS Happening.  Let's Get Sketchy was a team effort of Boreal Artist Institute, Portrait Artists McMurray, Brazen Elephant Productions, Full Moon Cafe, NorthWord, Arts Council Wood Buffalo and Keyano Theatre and Arts Centre.  It was enjoyed by the participants and over 300 patrons who took in the Saturday evening performance of VIGILANTE by Catalyst Theatre. 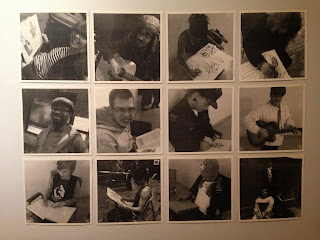