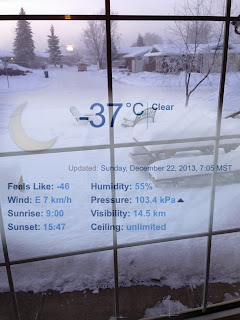 We are in the middle of a cold snap that compares to any of the worst ones we've experienced over my 18 years of living in Fort McMurray.  This morning, the suspended ice crystals in the air are being pushed along by a light east wind, enough to make it feel like minus 46.

This was what it looked like the day I arrived in the community in January of 1996. That was a similar cold stretch and my introduction to life in northern Alberta.

"There are so many postings about the cold," said Heather the other night, going over her Facebook feed. 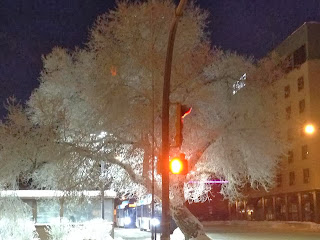 You see, I think we inherently are aware of our audience, whether we think of ourselves as communicators or performers, or not.  Screenshots of the current weather showing a windchill of minus 47, or photos of frost-laded trees, are benign to those of us that live here, but exotic and adventurous to those in our Facebook worlds who live in warmer places.  I think of a high school friend who lives in Arizona and just recently had to turn on the heat for the first time in their house. Or, even friends who live in the Vancouver area who see the entire metropolis come to grinding halt when they get a mere skiff of snow. What happens here and other northern locations is epic, frontier-like - the arctic frontier. 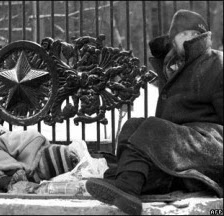 I went looking for an anecdote I read from one of the staffers at the Centre of Hope earlier this morning, but couldn't find it.  Unfortunately, I have too many information streams coming at me and backtracking to find something particular can be difficult.  The essence of the story was the depth of cold being experienced by a homeless patron when she went to open the doors of the facility yesterday.  It hurts my soul to think of those who are suffering through these incredibly cold temperatures, sleeping rough.

We are so dependent on the things that protect us from the cold: the natural gas that heats our home, the electricity that provides light and the energy to move the warmed air about, the insulated walls and ceilings, the clothes on our backs.  Eliminate any one of those in weather like this and you begin to feel the difference almost immediately, like when we had that power outage a week ago.  Eliminate all but the clothes on your back and you begin to get closer to the reality that some our citizens face each day, as unfathomable as it may seem.

I sleep incredibly well in this weather.  The bedroom wall next to my side of the bed isn't well insulated, so the cold pulses through the drywall, inspiring a cocooning effect.  It makes me think of my father growing up in the old farmhouse back in Saskatchewan with no electricity, central heating, and insulation that probably consisted of little bits of old newspaper stuffed between the boards.

"The only heat we had was from the stove in the living room downstairs," he said.  "It would get pretty cold when the fire blew itself out in the middle of the night.  By the morning, the piss pot would be frozen solid.  I remember waking up and hearing swish swish, swish swish - the sound of the rats' tails as they scurried across the frozen floor."

I love that story, even though I realize it has likely been embellished over the years.  That old farmhouse is still there, though the living room was eventually gutted to be used as a place to park the tractor. A rope hangs down from the hole in the ceiling, which provided us kids with a way to get up to the bedrooms shared by my father, his brothers, sister and parents, and the rats.

I wonder about global warming when it's this cold, though I understand that warming trends are seen in data gathered over many years and that frigid blips like this probably don't indicate much except a set of meteorological circumstances that conspired to thrust us into the deep freeze for a week or two.

"I like winter in the north," shared Bill on Facebook a few moments ago.  I agree completely.  There is a romanticism to elongated cold stretches, a majesty and mystery that has always intrigued me.  One of my fondest Christmas memories this triggers is from the mid-1980's when I had a part-time job shovelling all the sidewalks of St. Stephen's Roman Catholic Church in Kamsack, Saskatchewan.

It was a bitterly cold Christmas Eve, much like it is now, except that it was snowing.  I bundled up in my long black wool coat - a hand-me-down from my Grandpa - toque, scarf, and double-layered mittens and spent several hours clearing the walk for the midnight mass crowd.  The biting cold, the crunch of my boots, the anticipation of people arriving, the magic suspended in the air as Christmas morning approached all combined to fill me with gratitude for being given the all-important task of making things right and ready for the congregation.  I remember feeling grown up on that cold winter's night, on the brink of being a man. 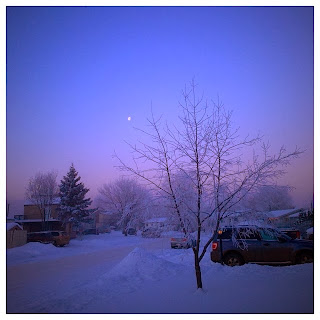 I'm much older now, watching my sons beginning their transition from being boys to men.  But I still appreciate the magic and mystery of the cold, the luxury of getting a fire started in the fireplace to start the day, with the lights of the Christmas tree sparkling in the background.  In a week, we'll be in Mexico enjoying the paradise conditions of the Mayan Riviera.  For now, I'm glad to be here, trying to keep warm, anticipating the arrival of family later today, and of Christmas mid-next week.  To be honest, there is nowhere else on earth I'd rather be.
Email Post