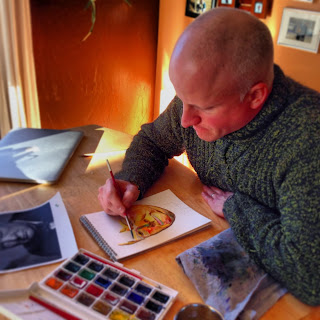 It had been a number of days since I had picked up the brush.  I knew Sunday (yesterday) would be a painting day, but I had no idea what my subject would be.

Winston Churchill popped into my head first thing in the morning. I did a quick Google search for photo portraits.  The one that jumped out at me was the one by Yousuf Karsh, arguably, the most reproduced photographs in the history of photography.

Churchill had no idea he was getting his portrait taken that day.

The year was 1941.  He had been on a trip to Washington before swinging up to Ottawa, where, according to Karsh, he had given an "electrifying speech".  Walking arm-in-arm with Prime Minister Mackenzie King into the Speaker's Chamber, he discovered an elaborate set-up of flood lights and a camera.

You see, no one had had the courage to tell him that they wanted to get his portrait taken.

"Sir, I hope I will be fortunate enough to make a portrait worthy of this historic occasion," said Yousuf.

His entourage began to laugh, Churchill lit a fresh cigar, puffed at it with a "mischievous air" and finally acquiesced.

While Karsh moved around checking lights, levels and settings, the British Prime Minister kept chomping at his cigar.  He wouldn't part with it for love nor money.

Without any forethought, Karsh stepped forward, said "Forgive me, sir," and unceremoniously yanked the stogie from his mouth.  By the time he got back to his camera, Churchill was frozen in a state of belligerence.  It was in that moment that he took the photograph. 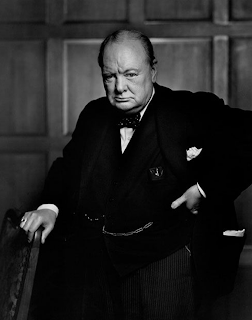 I knew we had a Karsh tabletop book somewhere in the house, so I went scurrying around trying to find it, with no success.  Either it had cleverly tucked itself in a spot that I missed - we have books in almost every room - or it mistakenly got given away or sold at a garage sale.  Nevertheless, I printed out the version I found online and used that as my reference.

I always start by sketching it out before picking up the brush.  But before I did that I sat there staring at the empty sheet of watercolour paper, contemplating my approach and the proportions. I most often start with the eyes, as they are key, but this time I started with Mr. Churchill's right side of his face. I then worked my way over to the eyes, to his ear and finally to his nose and mouth.

Once the sketch was complete, I started with the bright yellow, hitting the spots on the face with the greatest amount of light and slowly added darker colours and textures.  From start to finish, it probably took me 7 or 8 hours.  I was pleased with the result, though like many of my previous works, was sceptical that it was all going to turn out well. 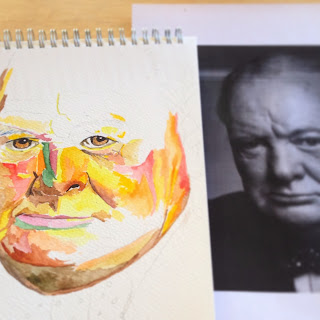 Here is the progression of the piece: 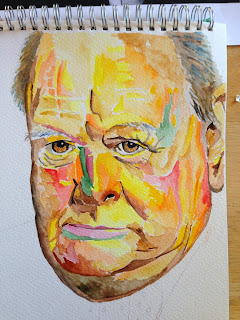 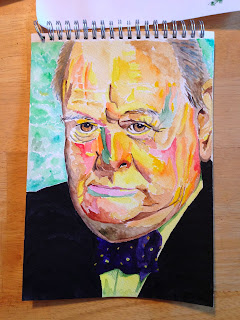 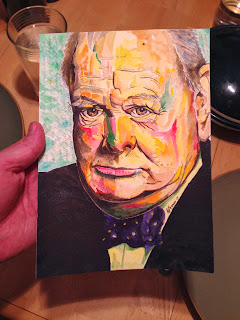 I added some text to the finished painting, which you might not pick up at first glance.  The first is a Churchill quote that I truly appreciate.

The second, written in the background, is a snippet from his most famous speech, delivered to the House of Commons of the Parliament of the United Kingdom on June 4, 1940.


There was an immediate reaction to this portrait when I posted it on Facebook and Twitter last night.  I suspect there are two reasons for that.  First, that the recognition factor was so pronounced.  Assuming that I did a mildly adequate job, the majority of viewers would instantly recognize one of history's most illustrious leaders in one of the most famous photographic portraits of all time.  Second, the artistic treatment - following the style I've been playing with for over two years - is rather different, possibly even striking.  I'd like to think that the combination of the two draws you into the man, the myth, the legend in a way that is rather compelling.