In the creative groove

I can't explain why I've been painting so much lately, except that waves of creative instincts have been crashing into me and instead of fighting against them, I go for a little ride.

There was no forethought about painting my father on Christmas Eve.  Winston Churchill was done and I had time on my hands to start something else.  Dad popped into my mind, a particular picture that I had taken last summer. 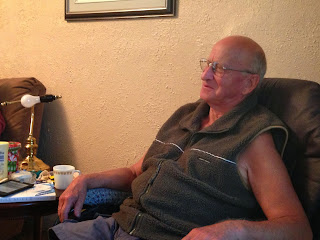 Early on Christmas morning I applied the finishing touches and it was done.


I called home to Kamsack later that morning, to wish Mom and Dad a Merry Christmas, and to catch up before they got swept away in a robust family gathering, expected to be about 35-strong.  Mom pulled up the scan of the painting that I had emailed to her on the computer and showed Dad as we were talking on the phone.

"Look," he said.  "It's the old goat!"  He laughed and laughed, obviously tickled that he had been my latest subject.

The painting had inspired a few tears shortly after I had posted it.  If you carefully look at the text in the background, you'll set a sense as to why one of my sisters got a little emotional seeing it out of the blue on Christmas morning, and within the context that my father, against rough odds, is a determined cancer survivor.

By the afternoon, I was already looking for something new to paint.  I had come across Karsh's portrait of Ernest Hemingway a few days earlier when I was looking for a photo of Mr. Churchill.  I knew the moment it popped up on my screen again that it was meant to be my next piece. 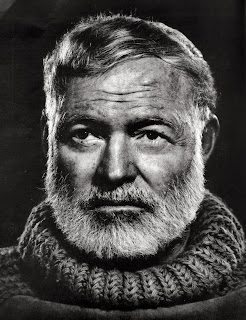 I broke tradition with this one, moving to a larger (and lighter) paper that Ben had given me for Christmas, and using a set of brushes that he had also gifted.  Up to this point, I had been using the same brush for the entirety of my watercolour series.


As I have been sharing the work as it get produced, I've had a few requests about purchasing originals or prints, and a few for commissions.  My response has been pretty consistent to both enquiries: I don't do this to make money, and as such, tend to give them away as gifts rather than selling them. In a few cases, they have been donated to charity auctions, as a way of supporting causes that matter to me. 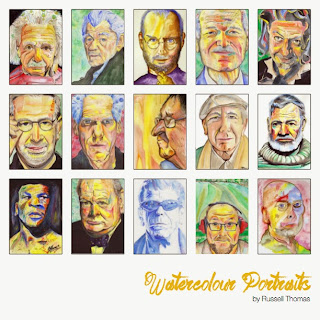 The collection is largely with friends and family, though not completely.  I've held on to a few originals, and am waiting to give several away.

Though I have taken on a few commissions over the years, they can add a level of pressure and personal expectation that can create unintended stress.  That said, I have encouraged people to send me photos as I'm always open to trying.  Generally though, I much prefer to paint something that "calls" to me, in the moment that it does.

It's been great having spare time to dive into painting again.  The holidays are great for it.  Once we return to business in January, painting will get set aside for many weeks of rehearsals and work projects. So while time allows, I shall keep painting and sharing the results.
Email Post