To the Barricades, Vol. 3

We had our first full day of rehearsal on Saturday, spending seven hours together in the rehearsal hall.  It was a great day, especially listening to some of the principals belt out their parts. 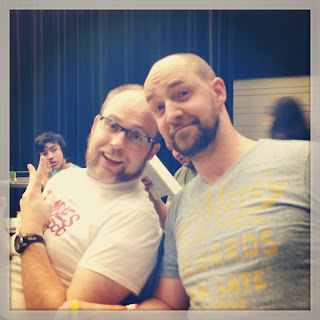 Sheldon Dahl and Tim Heggie have made enormous progress in the first week, playing Inspector Javert and Jean Valjean, respectively.  Together, they have several challenging songs and a confrontation scene that promises to be electric. 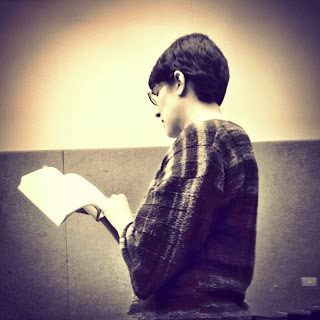 Jenny Price soars as Fantine.  It was nice to watch her from across the room, listening to her nail her notes.  Of all people in Keyano Theatre Company, she was among the most excited that we were doing Les Misérables.  I get the sense that she knows every word and note in the show, backwards and forward.

Playing adult Cosette is Kimerica Parr, a teacher up at Holy Trinity High School.  Her beautiful soprano voice perfectly suits the role.  With an extensive background in musical theatre, Kimerica is a strong addition to the ensemble.

Misty Oakes is playing Eponine, and sounded brilliant as all of us principals stood at the back of the ensemble in a group, belting out our solo bits in "One Day More".

Jamie Manship, a marketing colleague who works at MacDonald Island, sounds incredible every time he opens his mouth.  It is so wonderful to have him and so many other new people as part of this surge 'to the barricades'.

As we plunge head first into the intricacies of the music, it is the harmony bits that run counter to the melody that I find the most difficult.  I was visibly frustrated by the end of the closing song of Act 1 as I couldn't find my note to save my life.  My brain has been so well programmed with the melody notes of "Do You Hear the People Sing", that trying to learn something completely different is going to take some time.

A lot of the cast are taking out their mobile phones and recording pieces to take home and review.  My process is a little different, as I pull out the keyboard and review the notes one by one.  And while I couldn't point out a G from an A, I can read music, in so far as being able to look at the note on the page and find the right key on the piano.  In truth, it gets a lot more challenging when there are multiple sharps or flats in the key signature, but I manage to plod through.

So, I sat at the dining table learning the counter melody, the harmony bits to the finale of both Act 1 and the end of the play; it is pretty much the same thing, just pitched a little lower the second time around.  I feel way better for it. 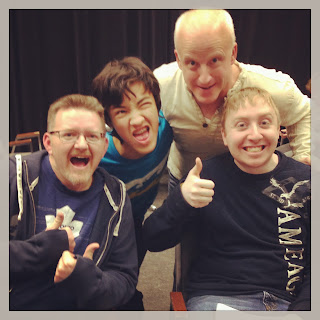 It was nice to have some free time with the group over lunch on Saturday, an opportunity to put a few more names to faces: Emma, Emily, Alexandra, Noah, Kelli, Rhiannon, Diana, and Kelly. 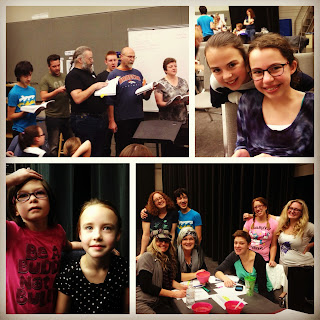 "Test me the next time I see you," I suggested to each after saying their names a couple of times.  These folks are what this journey is all about, and their many friends and family who will travel - in some cases, great distances - to see them perform in this epic production.

"My mom is coming from Ontario," said Elizabeth.  "I told her I was just in the chorus, but she insisted on coming anyway."

Elizabeth's mom gets it.  There is no such thing as "just in the chorus", as every single player in this show is important and essential to the experience that we will all go through together.  The end result will be an unforgettable production for the over five thousand patrons expected to attend over nine performances.

One of the things we discovered during Hometown...The Musical! was the enormous economic impact to the community of a large production.  In that show, we had relatives flying in from all over the country.  I'm fully confident that Les Misérables will produce a similar, if not larger, swell in tourism activity.
Email Post