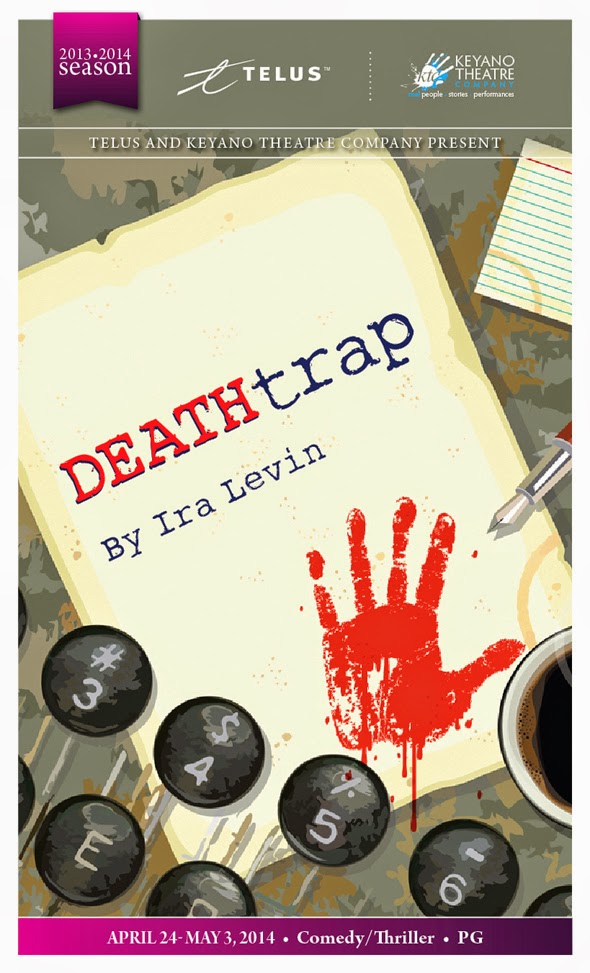 The cast and crew of Keyano Theatre Company's final show of the season had the unenviable task of being the follow-up act to Les Mis, one of the most critically acclaimed shows in KTC's 34-year history. Months after the final tear-filled curtain call, I still get approached by strangers complimenting us on the production, the most recent happening the other day in the Calgary airport, when a young lady come up to me asking: "Didn't you play that innkeeper guy?"

So, before turning a single page of the script, director Misha Albert and his team had their work cut out for them.  What we saw last night celebrates the true nature of community theatre, where people who want to explore theatre creation get the opportunity to do it.  In the case of Keyano Theatre Company, these dedicated community volunteers get to learn from seasoned professionals and experience first-hand the immersive production process, from first read through to the run for lights, from cue-to-cue to opening night.

Anecdotally, I've picked up that the growth has been phenomenal.  And what Dylan, Ben and I saw last night confirmed that Jim and Jane Jacques, Steve Reeve, Sherry Duncan and Eric Dunham are indeed riding the wave and picking up momentum.

What you are going to see when you come to this Ira Levin penned thriller-comedy, are real community people who have "dedicated hundreds of hours of volunteer time" (said Publicist Misty Oakes in her awesome pre-show speech last night).  I'm so proud of each and every one of them for stretching, exploring, and most importantly, playing.

There were a number of standout performances from the opening performance of Deathtrap.  First and foremost, Sherry Duncan was outstanding in the role of Helga ten Dorp.  Oh my goodness, did she own the stage when she appeared as the psychic neighbour.  The work she did with Misha on the accent, the sounds that emanated from her core, and her physicalization of the character, all contributed to a memorable and delightful performance.  Sherry has left no doubt that she is meant to be on the stage.  If director Misha Alberta lobbed the ball, then she hit it out of the park.

It was so nice to see Steve Reeve on the stage, making the leap from film.  He gave an incredibly solid, honest, and compelling performance.  He also made all three of us leap from our seats at a particular juncture in act one.  My heart jumped out of my chest, even though I had read the script and had a sense of what was coming.  Awesome!  I can't wait to see Steve on the stage again.

The surprise performance of the night for me was Jim Jacques in the role of Sidney Bruhl.  On stage more than anyone else, he injected a sinister yet playful sensibility to the character of the aging playwright.  I also thought his stage instincts were very strong.  In other words, he kept himself open to the audience, in a way that suggests that he has tread the boards in the past.  And according to the bio in the playbill, that is, in fact, the case.  He did some stuff with Grande Prairie Little Theatre in productions of Guys and Dolls and The Importance of Being Earnest.

I'm particularly proud of Jane Jacques for coming out of the seats, after 24 years of being a patron, and on to the stage.  She has been a sponge, according to director Misha Albert, absorbing direction and suggestions in her very first production.  If there is one compelling reason for me to return for a second helping of Deathtrap it would be to see how Jane evolves and grows as a performer over the 7-performance run.

Seeing Eric Dunham on stage always brings a smile to my face.  He's the "veteran" of the cast, having previously appeared in significant roles in Dracula and Bedtime Stories.  Playing Porter Milgrim, the playwright's legal counsel, Eric grabbed our attention and delivered a very strong performance.

"I couldn't stop smiling, from beginning to end," shared Dylan as we were walking out to the car to go home. 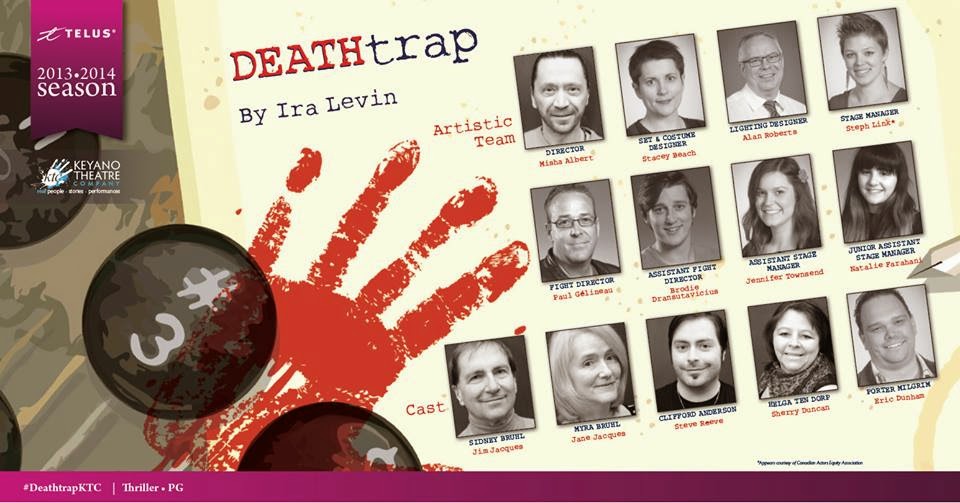 If you want to have an enjoyable evening out, seeing colleagues, friends and neighbours tell an interesting story in the context of a live community theatre performance, then make plans to see Deathtrap.  It runs tonight (Saturday), and next Wednesday through Saturday.  It's a thrilling ride, peppered with comic moments, and a plot that'll keep you guessing right to the end.
Email Post