It is +6 this morning.  I think it is the first time waking up this year to a temperature on the plus side of zero.  Perhaps Heather's observation last night that our barometer was showing super-high pressure might have been a clue that we were in for some delightfully warm weather today.

This has been a long winter.  Anyone who says otherwise must be out of their mind.  The extra weeks of cold have left the frost in the ground relatively unaffected, which we are seeing now with lots of standing water with nowhere to go.

The running joke in our neighourhood is how we inevitably have Lake Demers form at this time of year.  Two troublesome storm drains never seem to work at the end of winter, which leaves the runoff to pool in one of two low spots at the intersection just outside our house.  Municipal roads crews spent hours on Sunday trying to fix things up, but to no avail.

King Street was having similar issues yesterday, especially in the spot just as you turn into the Keyano College parking lot.  The water had to be 18" deep by the time I left to go home at the end of the day.

The province issued a spring runoff advisory and included Fort McMurray on the list of communities that might have drainage issues in the next couple of days.

A rapid melt caused by the quick change to normal and above normal temperatures combined with the existing much above average snowpack in the plains may cause localized overland flooding as the water makes its way into streams, the advisory stated.  In low-lying areas where water does not have a direct route to stream channels localized ponding can be expected.

People are advised to contact their local municipality of any blocked or frozen culverts that are observed which are currently causing drainage issues or may cause issues in the near future.

I went looking for the number to call at the municipality to report storm drain issues, so I sent them a tweet.  They responded in short order with the following number: 780-799-5823.  I understand from Facebook that there are a lot of trouble spots and getting a crew to your area might take some time.

Despite the concern that abundant water creates at this time of the year, I love spring's awakening.  I was up on the roof this weekend, binoculars in hand, watching the dozens of beautiful birds with a splash of yellow on their tail that were feasting in our trees in the backyard.  Thank goodness Heather had bought me a bird book a number of years ago for my birthday. I flipped through the pages until I found the Bohemian Waxwing. 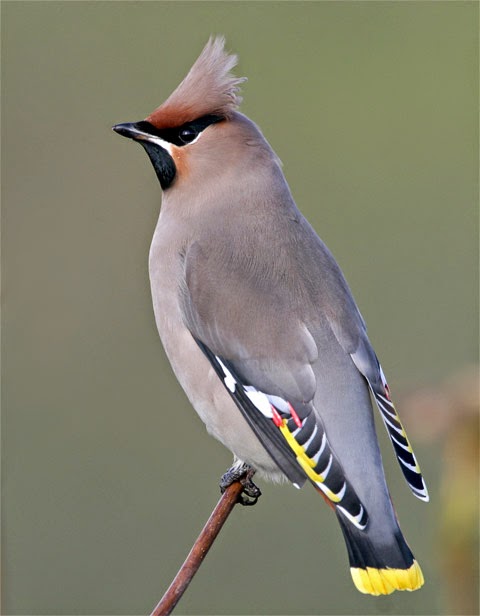 Moments later I heard a distant squawking that was progressively getting louder.  I swung the binoculars up to the sky in the direction of the sound, and there were three Canada Geese heading north.  The jubilation I felt watching those early adopters was off the charts.  Spring had indeed arrived.

Neither the chives nor the tulips have emerged yet - the soil is still too frozen.  But a few more days like this and we should see some happy shoots emerge soon.

It's always a blessing to see the neighbourhood children come out into the spring pools and slush and meet each other.  Over the winter, there often seems to be a churn of families which means new friends to make when the weather gets nice.  Several were out in their rubber boots last night trying to coax the water down the drain and becoming acquainted with one another.

With the snow rapidly disappearing from our front lawns, thoughts will begin to shift to the inevitable river break that could be 2 - 3 weeks away.  The average date that the Athabasca starts to move is April 24th.  In a year that has been anything but average, I would keep an eye and an ear on media reports, especially if you live in one of the low lying areas in the City Centre. Grab your River Breakup brochure and have a conversation (or two) as a family as to what you would need to do in the event of a flood.  Being proactive now could make a world of difference if we happen to get a dynamic river break followed by an ice jam.

As a final thought, enjoy this beautiful day. Smile at a neighour.  Say something nice to a co-worker.  Hug your kids.  Let's maximize the bliss that Mother Nature is going to dish out today in spades.
Email Post